Despite soaring tensions between the US and Russia amid Russia-Ukraine war, space agencies of both countries are still managing to work collaboratively. 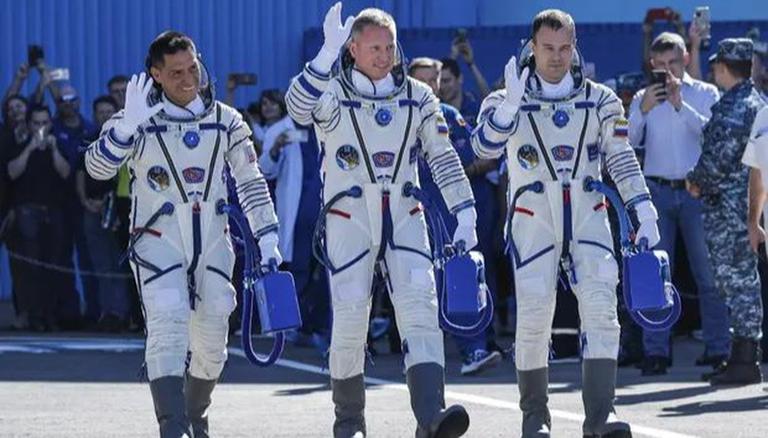 
Despite soaring tensions between the United States and Russia, space agencies of both countries are still managing to work collaboratively. At the latest, astronauts of both countries arrived at the International Space Station on Wednesday. US astronaut Frank Rubio and two Russians-- Sergey Prokopyev and Dmitri Petelin-- arrived safely in a rare instance of cooperation between Moscow and Washington. According to NASA, the Soyuz MS-22 spacecraft carrying Rubio, Prokopyev and Petelin of Roscosmos, docked to the station’s Rassvet module at 1:06 pm EDT. Following two orbits, docking occurred about three hours after a 9:54 a.m. launch from the Baikonur Cosmodrome in Kazakhstan.

LIVE: A new crew is welcomed aboard the @Space_Station. Watch as the hatch is opened and three space travelers including Frank Rubio of @NASA_Astronauts begin their six-month mission: https://t.co/5vYpzBoJd5

Both Russian and US astronauts will spend nearly 180 days on the ISS along with three other Russian cosmonauts, three other US astronauts, and one Italian. Notably, it's been more than 24 years since Russia and the United States started working together in space. Since their collaboration, the world gets a chance to witness a number of space secrets that have been under the rubble for billions of years. However, the collaboration of the two countries is facing turbulence and, the possible repercussions can now be felt in space due to the actions taken by Russian President Vladimir Putin on Earth.

However, NASA released a reaction statement saying, "The collaboration will continue. No changes are planned". It said that the agency will continue to support "ongoing orbit and ground station operations". The same has been witnessed on Wednesday when a US spaceman travelled with two other Russians. Throughout their six-month stay aboard the orbital outpost, the trio will work on science and research in technology development, Earth science, biology, human research, and more.