Team India scripted history on Sunday by defeating 14-time champions Indonesia in the finals to lift the Thomas Cup for the first time in 73 years. 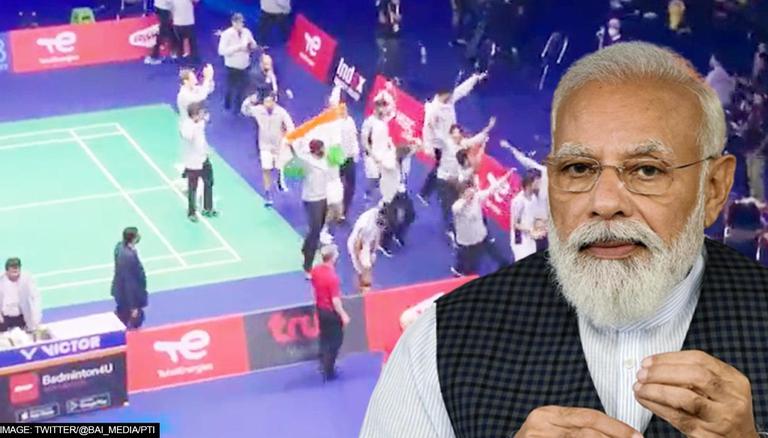 
Team India scripted history on Sunday by defeating 14-time champions Indonesia to lift the Thomas Cup for the first time ever in 73 years. A team comprising of Lakshya Sen, Kidambi Srikanth and the world no.8 duo of Chirag Shetty and Satwiksairaj Rankireddy helped register a dominant 3-0 win in the finals on Sunday. Following the Indian team's historic performance, Prime Minister Narendra Modi took to his official social media handle and lauded the players.

Prime Minister Narendra Modi described how the entire nation is elated after Team India produced a memorable performance in the Thomas Cup. He congratulated the entire team and gave his best wishes for their future endeavours. He concluded his post by hoping that this performance of the team would motivate all the upcoming sportspersons to come.

The Indian badminton team has scripted history! The entire nation is elated by India winning the Thomas Cup! Congratulations to our accomplished team and best wishes to them for their future endeavours. This win will motivate so many upcoming sportspersons.

Despite having a slow start in the knockout stages, Lakshya Sen delivered when it mattered the most as he gave India a 1-0 lead with an outstanding comeback win when he defeated world no.5 Anthony Sinisuka Ginting 8-21, 21-17, 21-16 in what was a fantastic show of temperament and skill.

Following Sen's performance, the country's best doubles pair of Chirag Shetty and Satwiksairaj Rankireddy showcased their mettle when they saved four match points in the second game to eventually defeat the Indonesian duo of Mohammad Ahsan and Kevin Sanjaya Sukamuljo 18-21, 23-21, 21-19, in what was a nail-biting three-set thriller.

After Team India gained a 2-0 lead in the Thomas Cup final, former world number one Kidambi Srikanth produced yet another outstanding performance in the second singles when he defeated Asian Games gold medallist Jonathan Christie 21-15, 23-21 in just 48 minutes.

Pure show of grit and determination & India becomes the #ThomasCup champion for the 1️⃣st time in style, beating 14 times champions Indonesia 🇮🇩 3-0 in the finals 😎