Vanessa paid an emotional tribute to her husband Kobe Bryant, sharing his love for fans as she took the podium in Uncasville. 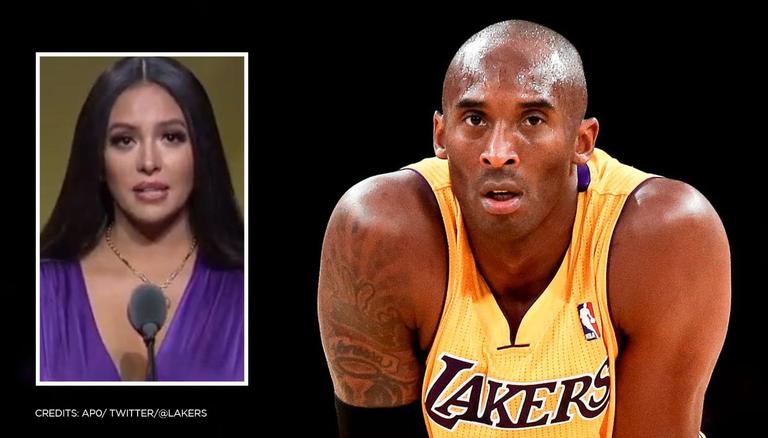 Vanessa paid an emotional tribute to her husband, sharing his love for fans at she took the podium at the Mohegan Sun Resort and Casino in Uncasville, Connecticut,

"He never forgot about his fans. If he could help it, he would play every minute of every game. He loved you all so much," she said.

She continued, "I remember asking me why he couldn’t sit a game out because he was hurting. He said, 'what about the fans who saved up to watch me play just once."

"Kobe’s personal stats speak for themselves, Kobe was on a different level," Vanessa added.

"He never took shortcuts when it came to basketball, he gave this game his all. Kobe played through injury after injury, to name a few, he had IVs administered to him during haf-time to play through food poisoining and the flu" she added.

"He played with a broken nose, he had a broken finger and ha snapped back in pace just enough to finish the game. He also taught his left hand to play the rest of the season while his finger healed. He never forgot about his fans and If he could help it, he would play every minute of every game," she shared

READ | NBA Hall of Fame 2021: LeBron James has message for late Kobe Bryant ahead of induction

Kobe’s induction into the Class of 2020 was scheduled to take place last year, but it was  delayed due to the coronavirus pandemic.

"Kobe would thank everyone who helped him get here, including the people that doubted him and the people who worked against him and told him he couldn't attain his goals," she said.

Kobe loved the game. And he loved his fans. #MambaForever pic.twitter.com/JF4gmXispY

Kobe and his 13-year-old daughter Gianna died along with six family friends and the pilot died in a helicopter crash in California on January 26. He was 41. The incident sent shockwaves across the world with members of the sporting and entertainment fraternity mourning his loss.

Kobe was considered among the greatest players to have played the game, as he won NBA Championships for the Los Angeles Lakers five times, was a part of the All-Star, All-NBA Team and All-Defensive  Team, 18, 15 and 12 times respectively, apart from being the 2008 MVP and the MVP in two finals. He was ranked fourth in the all-time regular season and post-season scoring.