The fight between LeBron James and Isaiah Stewart happened 3 minutes into the third quarter after James' accidentally hit Stewart during a free-throw attempt. 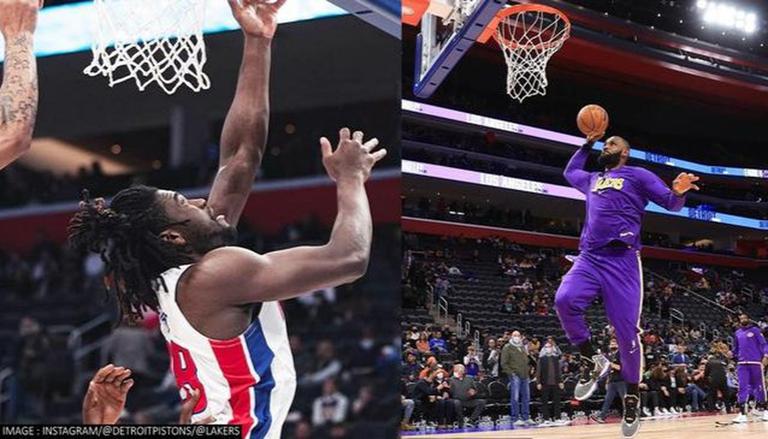 
All hell broke loose during the NBA game between Detroit Pistons and Los Angeles Lakers with Lakers star LeBron James and Pistons player Isaiah Stewart getting ejected from the game.

The ejection to both players was given as a result of the fight between Isaiah Stewart and LeBron James. The match saw the Los Angeles Lakers defeating Detroit Pistons 121-116.

The fight between LeBron James and Isaiah Stewart happened just three minutes into the third quarter. Both James and Detroit Piston's Stewart contested a rebound on a second free-throw attempt but it was James' elbow that hit Stewart. The Pistons star stumbled backwards, bleeding from near his eye. James went over to apologise but Stewart was having none of it. He regained his feet and immediately charged at LeBron James before players from both teams intervened to stop the fight from getting ugly.

Stewart was escorted away by security and teammates, however, he broke free and made a second charge at LeBron James. Once things settled down both the players were sent to their locker rooms. Russell Westbrook was also hit with a technical foul for his role in the fight.

This was the second time that LeBron James has been ejected in his career. The first time he received ejection was back in 2018 when referee Kane Fitzgerald hit him with a technical foul for arguing a non-call in a game against the Miami Heat. James, back then, played for Cleveland Cavaliers and was ejected for throwing an air punch at Fitzgerald before charging at him and verbally abusing the official.

A replay of The Malice at the Palace avoided

The LeBron James and Isiah Stewart brawl episode brought back memories of the year when The Malice at the Palace episode happened. The Malice at the Palace brawl is still remembered as the most infamous brawl in NBA history. The incident took place in 2004, involving Detroit’s Ben Wallace and Indiana Pacers' Ron Artest, Stephen Jackson and Jermaine O’Neal.

Ben Wallace went for a layup but was fouled by Ron Artest. Wallace then shoved Artest after which a fight broke out. A fan threw a drink at Artest, provoking the Pacers player to jump into the stands and try to hit him. Artest was suspended for the remainder of the season, while his teammate Stephen Jackson and Jermaine O’Neal — who fought with fans were suspended for 30 and 25 games, respectively. Ben Wallace was handed a suspension for six games.