Ajinkya Rahane posted a picture of himself sleeping with a “Pink Ball”; Virat Kohli and Shikhar Dhawan took this opportunity to poke fun at him on Instagram

Indian Test stalwart Ajinkya Rahane took to Instagram on Monday to post a picture of himself sleeping with a 'Pink Ball'. His post was a direct reference to the upcoming pink-ball Test match against the visiting Bangladesh cricket team. Meanwhile, Indian cricketers Virat Kohli and Shikhar Dhawan took this opportunity to poke fun at their teammate.

Replying to the latest Instagram post of Ajinkya Rahane, Indian skipper Virat Kohli appreciated the click while Shikhar Dhawan, in his usual manner, wasted no time in mocking the cricketer. However, the banter did not stop there as Ajinkya Rahane himself came up with funny replies to counter his teammates' jibe at him. Check out the entire banter between the three cricketers. 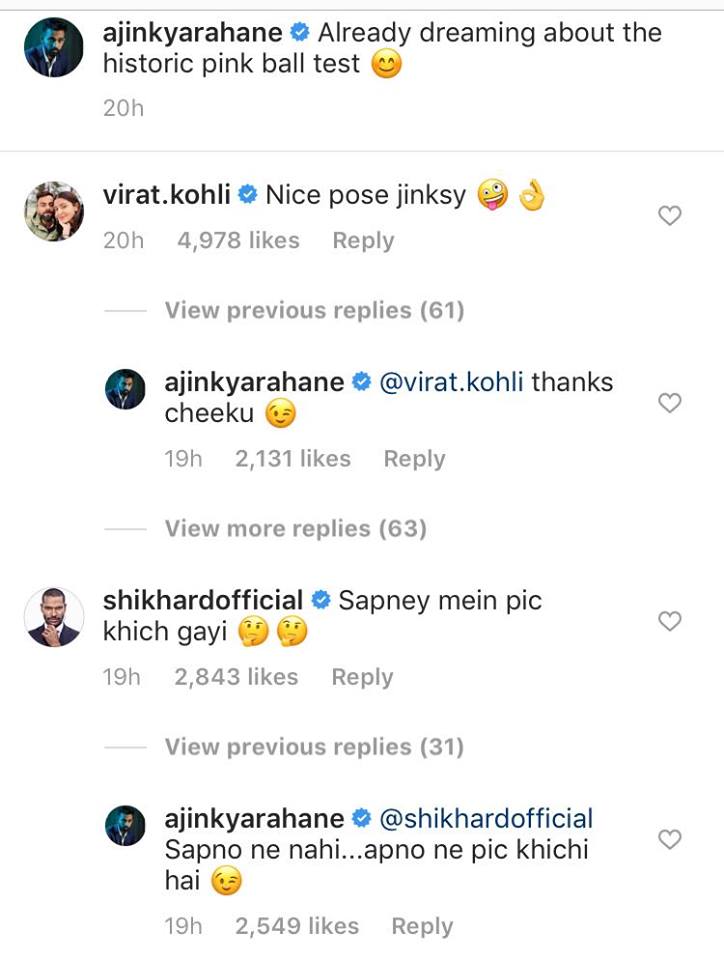 Time to gear up for the Pink! #TeamIndia begin prep under lights in Indore for the Kolkata Test #INDvBAN pic.twitter.com/MVzkaVjdmL

Also Read | Sri Lanka 'safe' To Tour For England, According To Kumar Sangakkara

Team India, who won the first Test by an innings and 130 runs, will now face Bangladesh in a historic day-night Test match. The upcoming ‘pink ball’ contest at the Eden Gardens is scheduled to start from November 22 onwards, and it will also be the first-ever to be organised in the country.

That's that from Indore as #TeamIndia extend their winnings streak in Test cricket.

They beat Bangladesh by an innings and 130 runs in the 1st @Paytm #INDvBAN pic.twitter.com/wwsZZTtSEj

Meanwhile, in the first Test, Ajinkya Rahane was one of the architects of India’s victory as the right-hander scored a crucial 86 runs from 172 balls. Opening batsman Mayank Agarwal also registered his highest score in the format with a match-winning knock of 243. With the win, the Indian team went 1-0 up in the series and also extended their lead in the ICC World Test Championship points table.