Andrew Symonds' Sister Leaves Handwritten Note At Crash Site: 'I Wish We Had One More Day'

Former Australian cricketer Andrew Symonds died in an accident in Townsville, Queensland, on Saturday after his car rolled over and went off the road. 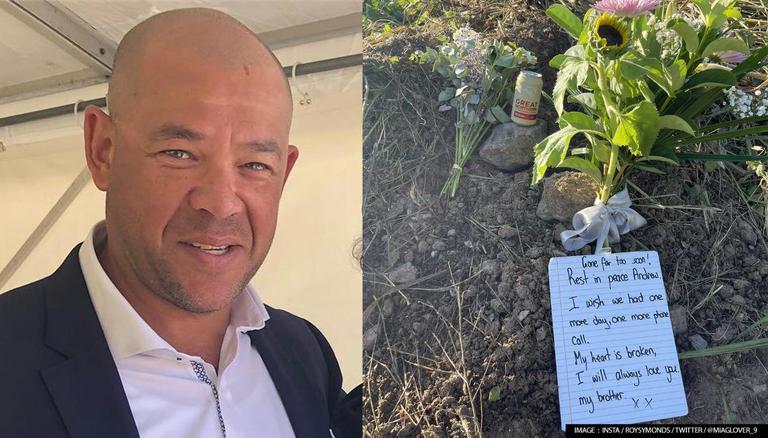 
Former Australian cricketer Andrew Symonds died in an accident in Townsville, Queensland, on Saturday after his car rolled over and went off the road. Louise, Symonds' sister, has written a touching letter in which she wishes she could spend one more day with her late brother. Louise said in her note, which she left near the accident site, that her heart was broken and that she will always love her brother.

"Gone far too soon! Rest in peace Andrew. I wish we had one more day, one more phone call. My heart is broken, I will always love you my brother," Louise wrote in her letter.

Floral tributes lay at the crash site where Andrew “Roy” Symonds lost his life on Saturday night, outside of Townsville.
The letter, penned by his sister, reads “I will always love you my brother” @TheTodayShow pic.twitter.com/Wt3EZGc6Ty

Symonds was killed on Saturday after being involved in a tragic car accident. The former cricketer was travelling alone in his car with his two pet dogs when the incident occurred. According to reports, emergency responders tried to revive Symonds but he succumbed to his injuries. Local residents who arrived at the scene immediately after the accident revealed that Symonds' car was upside down when they reached the site. They saw the cricketer lying unresponsive with the engine running and the radio still on.

Babetha Neliman, one of the first people to reach the accident site, told 7NEWS that the two pet dogs were also present near the crashed car and didn't want to leave Symonds' side. The dogs were later handed over to the family members of Symonds. The late cricketer is survived by his wife, Laura, and two children, Chloe and Billy.

Symonds, who was part of Australia's World Cup-winning squad for two consecutive editions, had made his international debut in 1998. His first game for Australia was a One-Day International against Pakistan. Symonds went on to play 198 ODIs for his country, scoring 5,088 runs at an average of 39.75. Symonds also played 26 Test matches for Australia, starting in 2005. He scored 1,462 Test runs at an average of 40.61.

Symonds was also part of the Indian Premier League (IPL) in its formative years. He was the most expensive overseas player in the first edition of the cash-rich league. Symonds was bought by Deccan Chargers in 2008. He won the IPL title next year with the same franchise. Symonds then made a move to Mumbai Indians for a couple of seasons before retiring from the sport in 2011.

READ | Witness reveals last-ditch attempt to save Symonds' life after crash: 'He had no pulse'