Arjun Kapoor, who is Chelsea's India Ambassador, recently interviewed Chelsea right-winger Willian. From Lampard to Sarri, the No 10 spoke about many things

Bollywood star Arjun Kapoor, who is also Chelsea Football Club’s Indian ambassador, was mercilessly trolled by fans over an interview Brazilian footballer Willian. The actor has a video series on Chelsea's official page where he interviews the club's star. In a video posted by Chelsea Football Club on Facebook, Arjun Kapoor interviewed Chelsea No 10. Fans were unimpressed by Arjun and voiced their displeasure in the comments.

Also Read: Liverpool Vs Manchester City: 5 Things Fans Should Watch Out For

Fans were livid with the manner in which Arjun took the interview. He started the interview by saying that he's lucky enough to sit alongside someone who he's seen on the television screen.  Arjun Kapoor asked Willian some basic questions and asked if the right-winger had ever tasted Indian food. Fans also felt that the interview was more about Arjun Kapoor promoting his movies than help the fans know the footballer better. Arjun Kapoor asked Willian if he had ever been to India and how his 6-year tenure at the club has been. He further added that he respects the Brazilian international for his willingness to play for the team, despite the managerial changes.

Here are some of the reactions to When Arjun met Willian 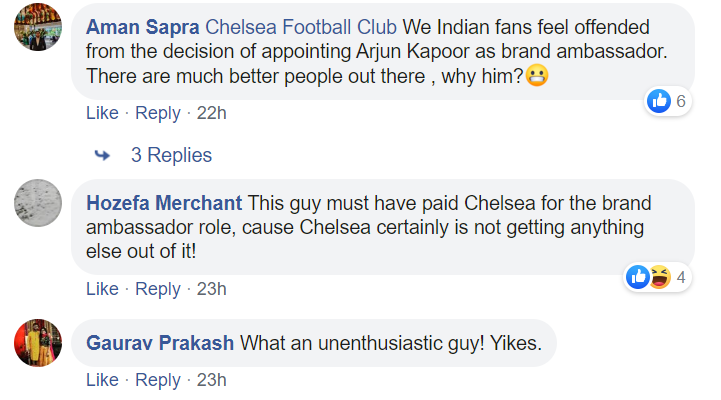 Willian: It's great working with Lampard

When Arjun Kapoor quizzed Willian on how it feels to be coached by Frank Lampard, he said that it great working with him. Lampard and Willian have played together for Chelsea before the midfielder moved to Manchester City and subsequently New York City. Lampard was appointed Chelsea manager after Maurizio Sarri left the post after winning the Europa League to seek the Juventus job. Willian said that Chelsea can achieve something special this season with Lampard's management and all the young talent they have at the club.

Chelsea are currently placed 4th in the Premier League Table having registered seven wins from their 11 games this season. The Blues take on London rivals Crystal Palace on Saturday in Matchday 12. Willian, who took the No 10 jersey after Hazard’s departure to Madrid, has featured in 10 of the 11 games the Frank Lampard side has played this season, scoring 2 and assisting 2 goals. He made over 300 appearances for the club, having joined from Russian outfit Anzhi Makhachkala.