As Virat Kohli Loses Final Match As RCB Skipper, Netizens Say 'will Support Till The End'

Netizens got emotional as Virat Kohli's last match as the captain of Royal Challengers Bangalore (RCB) ended in defeat against the Kolkata Knight Riders (KKR). 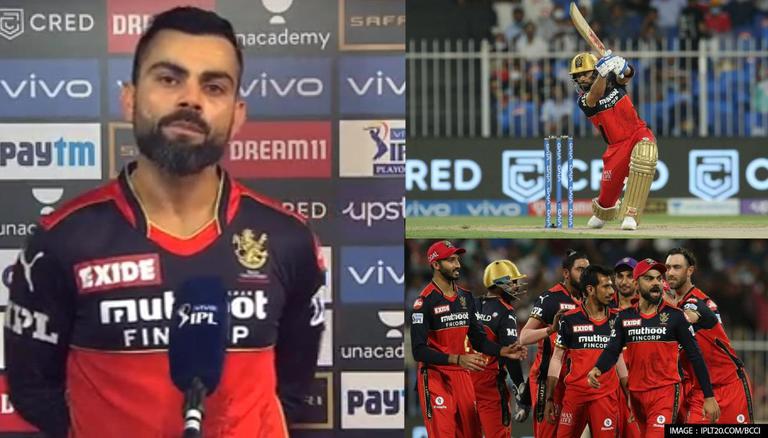 
Netizens got emotional as Virat Kohli's last match as the captain of Royal Challengers Bangalore (RCB) ended in a defeat against the Kolkata Knight Riders (KKR) on Monday. KKR chased down the target of 139 runs with two balls to spare, thereby ending Kohli's hopes of leading his side to a potential, also maiden IPL trophy.

Several netizens got sentimental as one of the greatest legends of the sport bowed down in defeat in his last match as skipper. One fan thanked Virat Kohli for giving them 'such memorable moments.'

Another user stated that they 'didn't want Virat Kohli's last match as captain of RCB to end this way.'

didn't wanted Virat Kohli's last match as Captain of RCB to end this way. We love you, King! ❤#RCBvKKR pic.twitter.com/p1oKPTDxM7

Another netizen was sad that RCB's hunt for a maiden trophy continues even after 13 years. The user felt worse knowing that it was Kohli's last match as an RCB captain.

13 Years without any Trophy 💔

It was the Last Match of Virat Kohli as a RCB Captain 😭😭😭 pic.twitter.com/TQmtU6XDTB

Several fans posted a sad image of Kohli sitting on the sidelines, knowing that his last match as RCB captain ended in disappointment.

Feeling Sad For Virat Kohli His Last Match As A Captain In IPL But Still Not Able To Win This Thats So Sad.#RCBvsKKR pic.twitter.com/kFAGl4SWrK

Last Match As Captain.
But My Captain Is Not Happy. 💔@imVkohli #RCBvKKR pic.twitter.com/G0lVJnoQQ5

Another netizen wrote that they will continue supporting Kohli until his last match. The emotional fan ended the tweet by thanking Kohli 'for making the team RCB.'

Virat Kohli. When I started supporting u & RCB it was without any condition. So today I m heartbroken as this was ur last match captaining for RCB. But the support continues till the last👍
Love you @imVkohli ❤ Thank u for making the team RCB❤🖤#RCBianForever #ViratKohli pic.twitter.com/d6x0fgPnO5

Virat Kohli's says he's given his best as RCB captain

While reflecting on his career as RCB captain, Virat Kohli said, "I have tried my best to create a culture here where youngsters could come in and play with freedom and belief. It is something I have done with India as well. I have given my best. I don't know how the response has been, but I have given 120% to this franchise every time, which is something I will now do as a player. It is a great time to regroup and restructure for the next three years with people who will take this ahead."

Kohli insisted that he will continue to stay at RCB as he does not see himself 'playing anywhere else.' For him 'loyalty matters more' than other pleasures. He ended by saying that he 'would be in RCB till the last day' he plays in the IPL.

WE RECOMMEND
Virat Kohli reveals two reasons behind giving up RCB captaincy post-IPL 2021
IPL 2021: Will it be MS Dhoni's CSK vs Virat Kohli's RCB in final? Fans can't keep calm
IPL 2021: How have the most expensive players of 2021 auctions performed? Read
T20 World Cup: Top performers of IPL 2021 who missed selection
IPL 2021: David Warner reveals he 'wasn't asked' to feature in SRH farewell video
Listen to the latest songs, only on JioSaavn.com