The bowler's end stump cam has now taken a fantastic shot of Joe Root playing a defensive shot into the ground & the ball bounces up & moves towards the stumps. 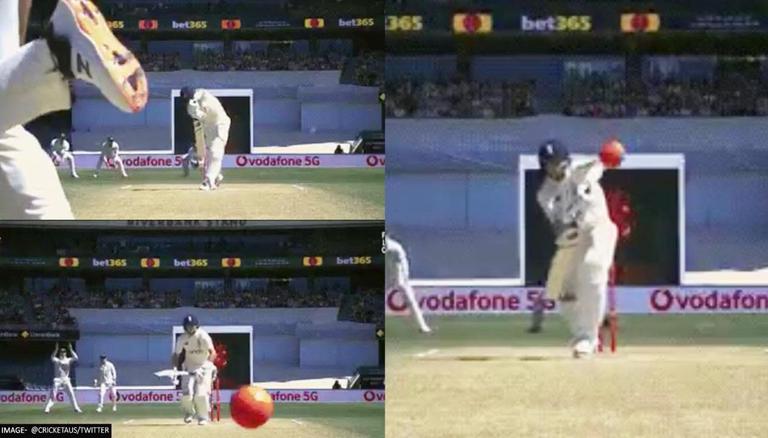 
On Day 2 of the ongoing second Ashes Test match, the stump cam brilliantly captured the image of lighting sticking the Adelaide Oval field. The bowler's end stump cam has taken a fantastic shot of Joe Root playing a defensive shot into the ground and the ball can be seen bouncing up and making its way to wickets and hitting them. Take a look at the wonderful visual of Joe Root's shot below.

For Australia, stand-in captain, Steve Smith narrowly missed out on a ton as he hit 93 runs off 201 balls, an innings that included 12 boundaries and a six. With cameos from Alex Carey (51), Mitchell Starc (39) and debutant Michael Neser (35), Australia eventually declared on 473/9. In reply, England had gotten off to a torrid start as they had lost two wickets early on, having scored just 17 runs then. Both openers, Haseeb Hameed and Rory Burns had walked back to the pavilion, having scored just six and four runs, respectively.

However, on Day 3 of the Adelaide Test, skipper Joe Root and Dawid Malan both put in a wonderful partnership as they both scored half-centuries with Malan managing 80 runs off 157 balls and Root managing 62 runs off 116 balls. The two managed to stabilise England's batting order and gave them some hope. But it did not last for too long as after the duo departed, Ben Stokes only managed to get to 34 runs off 98 balls before being dismissed by Cameron Green.

Nathan Lyon was fantastic for Australia as he took three wickets at an economy of only 2.07 but his fellow teammate Mitchell Starc was better as he grabbed four wickets including that of Malan just as he was looking settled and on his way to a century. England ended their innings trailing by over 200 runs and. Australia started well as they are at the end of Day 3 at 45 for the loss of one wicket as David Warner was run out for just 13 runs in 38 balls. Currently, Marcus Harris and Michael Neser are at the stumps with 21 runs and two runs respectively.