Australia vs England: England bowling coach Jon Lewis has put forth his opinions on Ben Stokes’ no-ball debate. The pacer bowled four no-balls on the trot 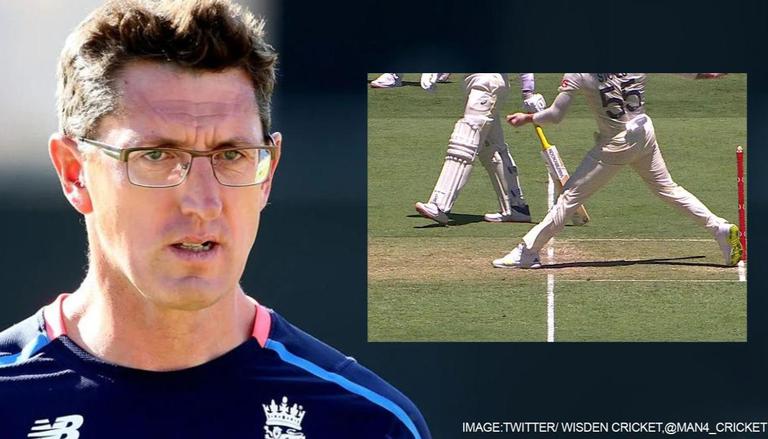 
England bowling coach Jon Lewis has put forth his opinions on Ben Stokes’ no-ball controversy on the second day of the opening Ashes Test at The Gabba in Brisbane. In his very first over, Stokes rattled David Warner’s woodwork only to realise that he had overstepped the popping crease.

After getting the reprieve while being on 17, the Australian opener made the Three Lions pay. The southpaw smashed 94 with 11 fours and two sixes before eventually getting out to Ollie Robinson. By then, the home team had already amassed a first-innings lead of 48 runs.

Interestingly Ben Stokes started his spell with four no-balls on the trot, one of which got Warner out, but three of those were not called due to technical failure. Jon Lewis stated that the on-field umpires should have made Stokes aware of his footing after the first ball itself.

"What a fast bowler need is some sort of understanding of where his feet are. You can’t see your own feet. So, the umpires are watching the line, and after the first ball, that’s Ben’s first ball on this ground in probably eight years," Lewis was quoted as saying by Fox Sports.

"In England, you have bowl throughs in the morning, but you don’t have them in Australia on the square; so, he’ll need some feedback from the umpires to understand where his feet are. It would’ve been nice for his first ball to be called a no-ball, so he could then have made an adjustment, and from then, he would’ve been behind the line because he then knows where his feet are," he added.

READ | Ashes: David Warner comments on 'comical' slip-up in 1st AUS vs ENG Test; 'In or not in?'

As per the ICC directives, the third umpires generally call the no-balls in a number of tournaments. However, in the AUS vs ENG series, the officials have resorted to the old playing conditions, letting the on-field umpires call the no-balls.

As far as Stokes is concerned, during the ongoing Australia vs England clash, he has picked up an injury scare while fielding after chasing down a ball to the boundary in the 29th over, he looked in quite a bit of discomfort.

"Obviously Ben has hurt himself on the field today so didn't bowl full pace at the back end of the day. Think our medical guys will assess him overnight and see how he is. Other than that the guys are okay." Lewis concluded speaking to the media after Day 2 of the 1st Ashes Test.

WE RECOMMEND
Ben Stokes reveals how a simple tablet nearly 'cost' him his Ashes dream
Controversy surrounds Ashes as Ben Stokes oversteps 14 times but no-ball only called twice
Ashes 2021: Australia announce Playing XI for tournament opener, Starc retains his spot
Buttler open to another day-night Ashes test, or any cricket
Ashes 2021: Is Alex Carey in line to make Test debut against England? Here's an update
Listen to the latest songs, only on JioSaavn.com