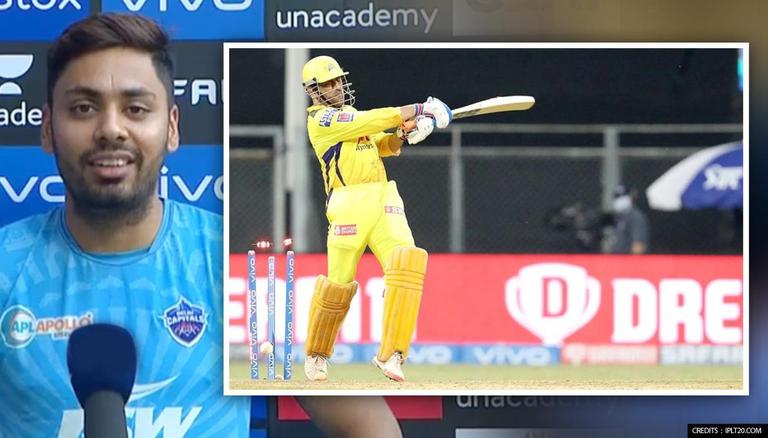 
Delhi Capitals' young speedster Avesh Khan became the talking point of the Indian Premier League (IPL) 2021 after he dismissed Chennai Super Kings' Faf du Plessis and skipper MS Dhoni for a duck. In match 2 of IPL 2021, Avesh Khan was preferred ahead of senior pacer Ishant Sharma and Umesh Yadav to play against the mighty Dhoni & Co. Avesh Khan's first outing in the IPL 2021 became memorable for him as he got his 'dream' wicket when he dismissed India's former world cup winning captain MS Dhoni. Now, in an interview with the Indian Express, Avesh Khan has revealed the Rishabh Pant factor that helped him bag his dream wicket.

Avesh Khan revealed how the sign language of Delhi Capitals skipper Rishabh Pant from behind the stumps helped him in the IPL 2021 and even in getting MS Dhoni's priced wicket. The 24-year-old right-arm pacer revealed that whenever he used to look at Rishabh Pant during his bowling run-up when the batsman was only watching him. Avesh said that Pant had a sign to almost every kind of delivery he wanted me to bowl which he generally signals him during the start of run-up be it Yorker or bowl wide outside off.

Avesh outlined the dismissal of MS Dhoni. The Delhi Capitals' pacer revealed that he wanted to have a long mid-on but skipper Pant wanted to keep the mid-on inside the circle when Dhoni came to bat. When Dhoni came out to bat there were few overs remaining of which Pant was aware. And as Dhoni was playing a long gap, he said to Avesh to keep the ball short of a length as it will be difficult for him to clear the field standing at mid-on. Avesh Khan followed the instruction and in the end, the CSK skipper was clean bowled after he got an inside edge.

"Three years ago Mahi bhai's catch was dropped. Mahi bhai's wicket is my dream wicket and now three years later I've fulfilled that dream and I'm very happy about it. It's also that he hasn't played cricket in a while, he hasn't been playing matches, so our plan was to initially maintain pressure on him, and I got the wicket because of the pressure" said Avesh Khan while speaking on the official website of Delhi Capitals.

Dhoni who had come out to bat in the 16th over after the fall of an in-form Suresh Raina looked to rediscover his rhythm and accelerate in the death overs but that was not to be as his stay at the crease came to an abrupt end on the third ball of that over. The DC speedster had bowled a good length delivery around off stump as 'Captain Cool' looked to slog it away only to get an inside edge as the ball ended up disturbing his timber and he took a long walk back for a silver duck.

Avesh Khan finished his spell with figures of 2/23 from his four overs at an economy rate of 5.75 as CSK finished their innings at 188/7 from their 20 overs.

READ | Avesh Khan hopeful of getting a game in England after rousing IPL, ready to fire if asked
First Published: 10th May, 2021 19:34 IST
SUBSCRIBE TO US