Bangladesh Batter Shocked As Bails Fall Off On Its Own; Netizens Suspect 'It's A Ghost'

Bangladesh and Zimbabwe will now face off in the third T20I match on Sunday at 4:00 p.m. IST. The game will help decide the series in either team's favour. 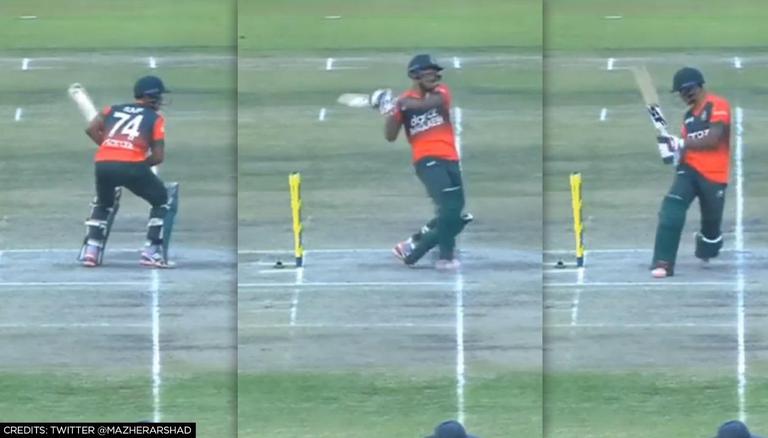 
During the second Twenty20 International between Bangladesh and Zimbabwe, the bails mysteriously fell off the wickets while the batsman was on the crease waiting to play the ball. The bizarre incident prompted umpires to go upstairs and conduct a hit-wicket review, which revealed that the batsman had not gone near the bails and that it had fallen off on its own. The match officials later concluded that the bails may have fallen off the wickets as a result of the wind. However, the explanation did not deter netizens from speculating that the bails were removed by a "ghost."

First ever wicket taken by a ghost 😛😂 pic.twitter.com/9vG0BI50S4

The incident occurred in the 18th over of the match when Bangladesh's Mohammad Saifuddin was on strike, helping his side chase down a total of 166 runs. The bails mysteriously fell off the wickets moments before the fifth delivery of the over, when the ball left bowler Tendai Chatara's hands. Not only the bails but also the stumps, appeared to have been knocked back as if deliberately pushed in that direction. Even the commentators thought it was some sort of supernatural occurrence but obviously in good humour.

There he is.. Is ne bails girayi thi left hand se pic.twitter.com/jPTVCbrJ0G

When ghosts want his favorite team to win the match even if they're losing.😁

Multi universe: in the other universe that batsman got out.. I think somehow it reflected in our universe.. 😊😊😊😊

Bangladesh eventually lost the match as they failed to chase down the target of 167 runs in 20 overs. Bangladesh was dismissed all-out for just 143 runs with 1 ball to spare. While Luke Jongwe and Wellington Masakadza took three wickets each, Tendai Chatara and Blessing Muzarabani dismissed two batters each to help Zimbabwe win the match by 23 runs and level the three-match series 1-1.

READ | ZIM vs BAN 3rd ODI LIVE streaming: When and where to watch Zimbabwe vs Bangladesh match

Bangladesh and Zimbabwe will now face off in the third T20I match on Sunday at 4:00 p.m. IST. The game will help decide the series in either team's favour. The Bangladeshi team had reached Zimbabwe earlier this month to take part in a bilateral series consisting of one Test match, three ODIs, and as many T20 internationals. Bangladesh won the one-off Test and annihilated Zimbabwe in the one-day international series. Bangladesh also won the first T20I by an 8-wicket margin.

READ | ZIM vs BAN 3rd T20I LIVE streaming: When and where to watch Zimbabwe vs Bangladesh match