Candice, while speaking to The Daily Telegraph, said she can't wait until David returns home, adding "It is going to be super emotional" for the family. 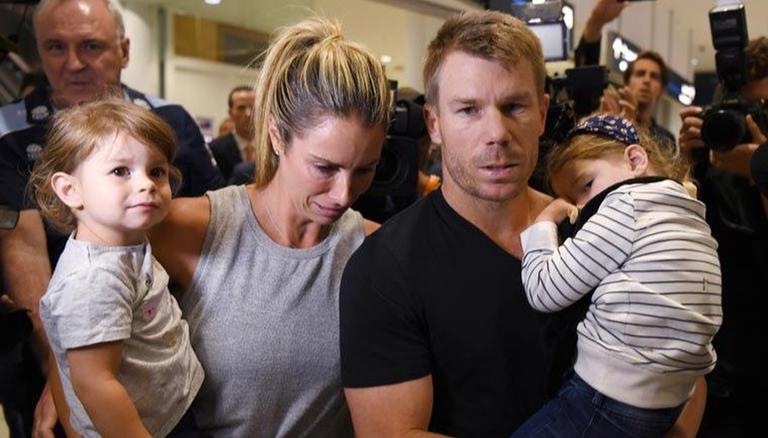 
David Warner's wife Candice has revealed the ordeal she and her children underwent while the Australian cricketer was stuck abroad. Candice, while speaking to The Daily Telegraph, said she can't wait until David returns home, adding "It is going to be super emotional" for the family as it has been "tough" on David and the family. The former Ironwoman told the British daily that the past couple of months have been really difficult for her and the kids, who can't wait to see their "Daddy" come home. David is currently completing his mandatory quarantine period in Sydney, where he arrived from the Maldives last week.

Candice further added that she and the kids are relying on FaceTime to talk to David in the meantime. The 36-year-old had earlier said they are looking forward to having him back home as soon as possible. The comment had come after the BCCI announced the postponement of the cash-rich league due to rising COVID-19 cases in India. The BCCI called off IPL 2021 mid-season after multiple franchises returned positive results. The Australian players and support staff were left stranded in the Maldives for at least a week before they were back home in a BCCI chartered flight.

David had an abysmal IPL season this year as not only his team Sunrisers Hyderabad (SRH) slid to the bottom of the points table, but he was also replaced as captain of the franchise. Kane Williamson assumed David Warner's duty in the penultimate game of IPL 2021, which was played between SRH and Rajasthan Royals. Williamson has prior experience of captaining an IPL franchise as he was also the leader of the Orange Army in 2018 when the side had reached the final of the tournament. However, it was under David's captaincy when SRH won its maiden IPL title in 2016, which led to split reactions on social media as fans were unaccepting of the decision.

David, who is arguably the best overseas batsman to have ever graced the Indian Premier League, was even dropped from the playing XI in SRH's game against RR, which turned out to be one of the last matches of IPL 2021 before the postponement. The change in captaincy did not bring any immediate result for SRH as they lost to Rajasthan Royals by a whopping 55 runs. Media reports suggest that SRH will release David Warner prior to the mega-auction next year, where a bidding war for the Australian superstar is expected to take place as teams would be dying to get a player of his caliber on board.

WE RECOMMEND
IPL 2021 may resume Sept 18/19 in UAE, 10 double-headers on road to Oct 9/10 final: BCCI
IPL 2021 official partner comes up with sports-like idea to hire best talent for companies
IPL 2021: Top 5 reasons why Sri Lanka is a better venue to host IPL than UAE or England
IPL 2021: List of all players so far who have left the event midway ft. R Ashwin
IPL 2021 broadcast chief has special request for Gautam Gambhir, KKR team management