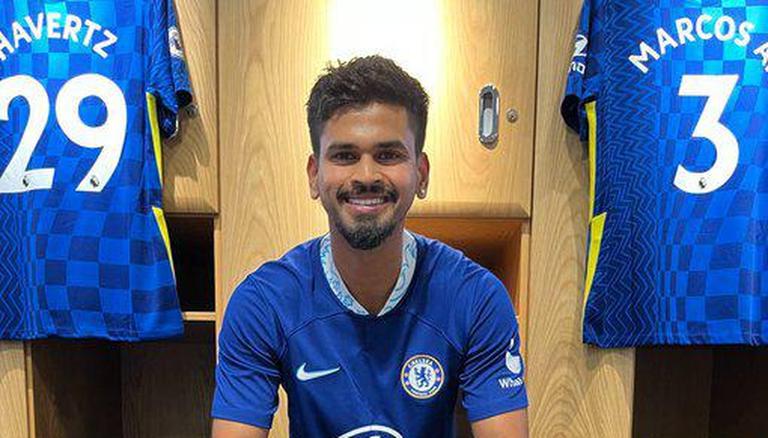 
Chelsea Football Club took to their official social media handle on Wednesday, August 3 to thank Indian cricketer Shreyas Iyer for stopping by Stamford Bridge. The Indian batter most likely would have gotten this picture clicked during the Men in Blue's recent tour to England.

Taking to their official Twitter handle on August 3, Chelsea FC uploaded a picture of Indian cricketer Shreyas Iyer wearing the team's shirt. Soon after the Blues uploaded the image of Iyer, Premier League India took to their Twitter handle and reacted to Chelsea's post.

Team India successfully chased down the target of 165 runs set by West Indies to win the third T20I and take a 2-1 lead. Having batted first, the West Indies scored 164 runs, Kyle Mayers smacking 73 runs off just 50 deliveries. Meanwhile, opener Brandon King, captain Nicholas Pooran, Rovman Powell and Shimron Hetmyer contributed with scores of 20, 22, 23 and 20 respectively. As for the Indian bowlers, veteran pacer Bhuvneshwar Kumar was the pick amongst them as he ended with figures of 2-35.

READ | Chelsea loanee Bakayoko breaks silence on being held at gunpoint: 'They went too far'

In reply, the Men in Blue chased down the target in just 19 overs, with opener Suryakumar Yadav smashing 76 runs off just 44 deliveries. He was aided at the other end with cameos from Shreyas Iyer and wicket-keeper Rishabh Pant, who contributed with scores of 24 and 33 respectively. The West Indies bowlers found it difficult to pick up wickets as Dominic Drakes, Jason Holder and Akeal Hosein ended with a wicket each.