Extending its support, CSK arranged for the delivery of 450 oxygen concentrators, at a time when Tamil Nadu has been facing a shortage of medical oxygen 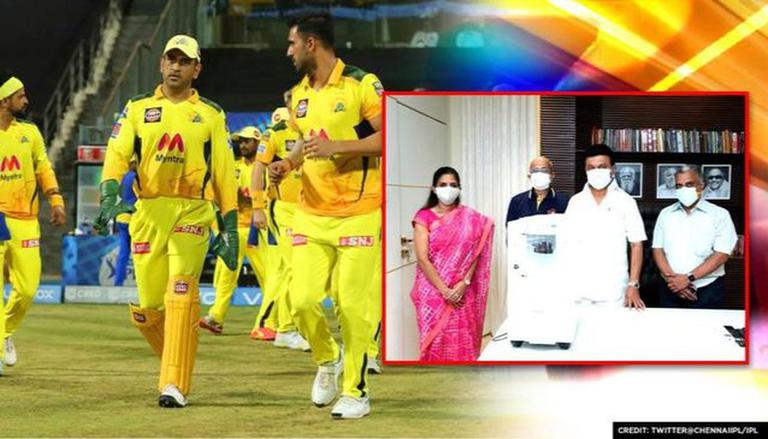 
Toeing the footsteps of Delhi Capitals, three-time IPl champions Chennai Super Kings on Saturday made its contribution to help Tamil Nadu combat the prevailing COVID-19 crisis. Extending its support, the IPL franchise arranged for the delivery of 450 oxygen concentrators, at a time when Tamil Nadu has been facing a shortage of medical oxygen. Symbolising the gesture, CSKCL Director Mr R Srinivasan handed over an oxygen concentrator to the new Tamil Nadu CM MK Stalin, in the presence of TNCA President Rupa Gurunath.

"Bhoomika Trust, an NGO involved in Covid relief operations, helped CSKCL in arranging for the supply of the Oxygen concentrators and will also coordinate in the distribution. The first consignment of Oxygen concentrators has arrived and the remaining is expected to reach early next week," the franchise said in a statement.

The franchise has informed that it is delivering the Oxygen concentrators for the benefit of COVID patients being treated in Government hospitals and the Greater Chennai Corporation (GCC)-run Covid care centres.

“The people of Chennai and Tamil Nadu form the very heartbeat of the Super Kings and we want them to know that we are all together in this fight against the pandemic,” CSK CEO Mr KS Viswanathan said.

As cricketers continue to step forward and contribute in India's battle against the lethal COVID-19 second wave, young wicketkeeper-batsman Rishabh Pant has now joined the bandwagon in making a humble donation to dodge the crisis. Taking to Twitter on Saturday, Delhi Capitals' captain Rishabh Pant informed that he has extended support to Hemkunt Foundation to help provide Oxygenated beds, COVID relief kits and much more through a monetary donation. The young gun, who has recently shot up the ranks with his power-packed performances for Team India, refrained from revealing the amount that he has donated.

Indian cricket captain Virat Kohli and his wife Anushka Sharma on Friday started an initiative to contribute towards COVID-19 relief work in India.  The power couple took to social media and launched a fundraiser campaign to help tackle the outbreak of the viral disease. Kohli announced that he and his wife are starting a campaign on crowd-funding platform Ketto, proceeds of which will go towards "ACT Grants", a movement working to funds for oxygen concentrators and medical solutions for COVID-19.

After a display of courageous performances for Team India, Rishabh Pant was appointed as the captain of Delhi Capitals as mainstay Shreyas Iyer had been ruled out of the tournament with an injury. The young gun did not shy away from leadership duties and excelled in his new role as well. Halfway through the tournament, Pant had led the team to number three on the points table before the IPL 2021 was called off after the bio-bubble was breached. A BCCI official quoted by ANI has revealed that the Indian Cricket Board is keen to tap the September window to conclude the IPL 2021 before the T20 World cup. The BCCI official hinted that if the COVID-19 situation will be under control in September then the 14th edition of IPL can be completed.