Cristiano Ronaldo in a pre-match conference moved Coca-Cola bottles out of frame and held up a water bottle instead, gesturing people to avoid cola. 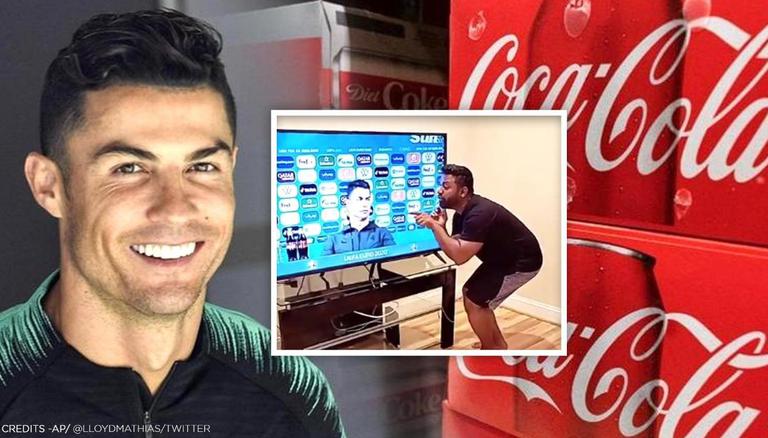 
If a late brace against Hungary wasn't enough for Cristiano Ronaldo to hog the limelight, the Portuguese superstar's simple act of moving Coca-Cola has not only lit up the Euro 2020 but also taken the world of the internet by storm. Showing up on June 15, at what is expected to be his last appearances at the Euros (but don't count on it), Ronaldo immediately made it to the top headlines even before the Portugal vs Hungary fixture. The Portuguese skipper, in the pre-match conference, moved Coca-Cola bottles out of frame and held up a water bottle instead, gesturing people to avoid cola.

What followed was a viral trend that also triggered an estimated $4 billion drop in Coca-Cola's market cap. A domino effect was also seen as several players, including Italy's Manuel Locatelli and France's Paul Pogba repeated similar acts of advocating against beverages leading to FIFA issuing a warning to national federations. Ronaldo's Coca-Cola video spread like fire on the Internet, evoking humorous reactions and causing a downpour of memes associated with the Juventus star.

After Ronaldo, Locatelli set aside Coke Bottle from the sight of Camera.
Coca Cola be like: pic.twitter.com/mkWByd9rb2

Me after watching Ronaldo saying drink water instead of Coca cola. pic.twitter.com/bqpnKeyDdV

I had to 😂😂😂 #ronaldo #coke #drinkwater pic.twitter.com/Y1bVFSeNry

Did Coca Cola lose billions due to Ronaldo's act?

Sports marketing expert Tim Crow has rubbished claims of Ronaldo's gesture leading to a fall in Coca Cola's shares. Crow explained investors aren't driven by what happens at press conferences and that the price of Coca Cola was already on a downward trend before Ronaldo's act.

He said, "To think that Ronaldo's gesture had an impact on the share price of Coca-Cola is complete nonsense. American investors are not driven by what happens in a press conference ahead of a European football match. It doesn’t work like that. Tonnes of stocks went down for several reasons but the two things are not related. There are a billion servings of Coke every day. I think they’ll be OK."

Ronaldo bagged a brace against Hungary in Portugal's 3-0 win on Matchday 1. The star winger overtook Michel Platini as European Championship's all-time top scorer and now has 11 at the marquee tournament. He holds the record for playing in most Euro Cups (5) and for playing the most number of matches (22). Portugal will now face Germany in their second group game on Saturday, June 19th before squaring off against France on Wednesday, June 23.