Chennai Super Kings (CSK) have been one of the most successful teams in the Indian Premier League (IPL) history. They have won the IPL thrice and are the second most successful teams after Mumbai Indians in terms of the number of titles. The 'Yellow Army' have also won the joint-highest number of the now-defunct Champions League T20 twice along with Mumbai Indians. In fact,  The MS Dhoni-led side have also managed to reach the last four in each edition of the IPL. Even during the previous edition, they had indulged in a lot of hilarious moments that were enjoyed by the fans. Recently, the Chennai based franchise had also trolled a fan in a hilarious manner.

CSK's hilarious response to a fan

Chennai Super Kings proved why they are unique and creative among other IPL teams when it comes to posting hilarious tweets. It so happened that a fan had apologised to CSK by writing that he loves Mumbai Indians but he has a 'crush' on the 2018 winners. 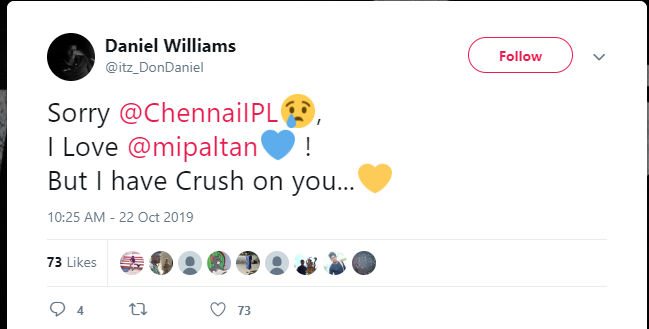 After having read this message, Chennai Super Kings wrote to the fan that he should never crush his love and instead, should always love his crush. The Chennai outfit had also posted a picture of South Indian superstar Rajnikanth. Take a look. 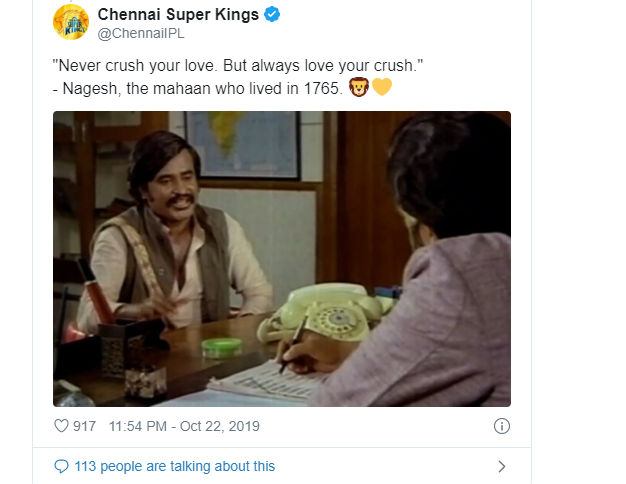 Chennai Super Kings had wished Virender Sehwag on his birthday and had shared a picture from his monumental knock of 319 runs at the MA Chidambaram Stadium in Chennai in 2008 against South Africa. CSK paid tribute to Virender Sehwag and said that the colour of the ball did not matter to the former opener and that he had known about the T20 format of the game before it was invented. Virender Sehwag in return replied to CSK's wishes in Tamil, leaving the netizens shocked. Virender Sehwag took to Twitter to tell the people of Chennai and Tamil Nadu that he loved them.

READ: Ashwin on playing ODI and T20I for India again: 'My hopes are alive'

READ: Kagiso Rabada signs off with a message for India: "Hats off"