As Team India is in a commanding position in the fourth Test, Dinesh Karthik took to his Twitter handle and lavished praise on skipper Virat Kohli. 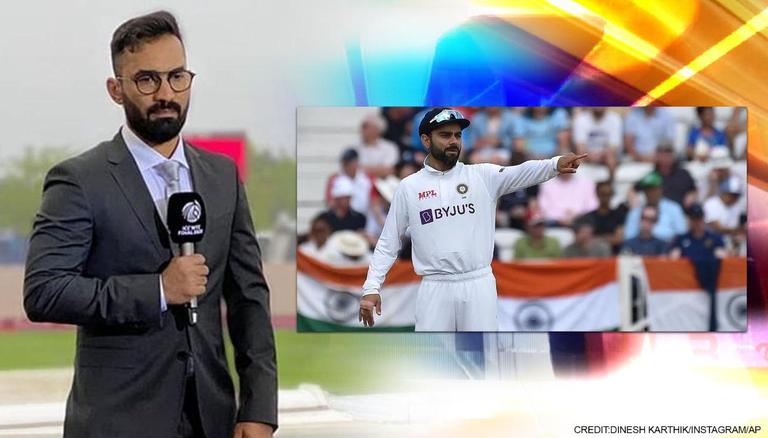 As Team India is in a commanding position in the fourth Test, Dinesh Karthik took to his Twitter handle and lavished praise on Virat Kohli. Karthik wrote that the beauty of Virat Kohli's captaincy in the India-England Test series has been inducing the combat zone mentality especially after Jasprit Burmah and Mohammed Shami's partnership at the Lord's stadium which changed the course of the game. Karthik also hoped that captain Kohli will reignite the same fire into the squad when Team India will come to bowl in the fourth innings.

The beauty of Virat's captaincy in this series has been the COMBAT ZONE mentality he got the team into after the inspirational partnership from Bumrah and Shami. In the 4th innings when they bowl at the oval, I'm sure he will rekindle that same FIRE in every person in the team! pic.twitter.com/NMp2kXlNHW

Test cricket has a certain fiery charm to it ❤️#ENGvIND @BCCI

Notably, Virat Kohli has been facing criticism for his choice of the squad, especially in the fourth Test. England's former skipper Michael Vaughan slammed Virat Kohli for keeping Ravichandran Ashwin out of the playing XI and also dubbed it the "greatest non-selection" ever.

Ashwin's absence, according to Vaughan, is "perhaps the biggest non-selection ever witnessed in four Tests in the United Kingdom." Indian commentator, Harsha Bhogle, was likewise taken aback by Team India's pick, saying that he was 'flabbergasted' that India have gone in without Ashwin again.

Since India's starting XI for the first Test was revealed, there have been appeals for Ashwin to be included in the team. When India lost the third Test against the host, the clamour for Ashwin's participation in the team became stronger, with both netizens and experts demanding his inclusion.

After Virat Kohli took the field in the fourth Test against England on Thursday, 2 September 2021, he became the first India captain to lead the country in ten or more Tests away from home. The fourth Test of the ongoing series is Kohli's 10th Test match in England as captain of the Indian side, putting him at the top of the list of skippers with the most Tests in a foreign country. MS Dhoni, the former Indian captain, is second on the list, having captained nine Test matches in England, while the legendary Sunil Gavaskar is third with eight Tests in Pakistan.