Watch the viral video of Dinesh Karthik's entrance inside the flight with Team India members hyping him up, which has sent Twitter into a meltdown. 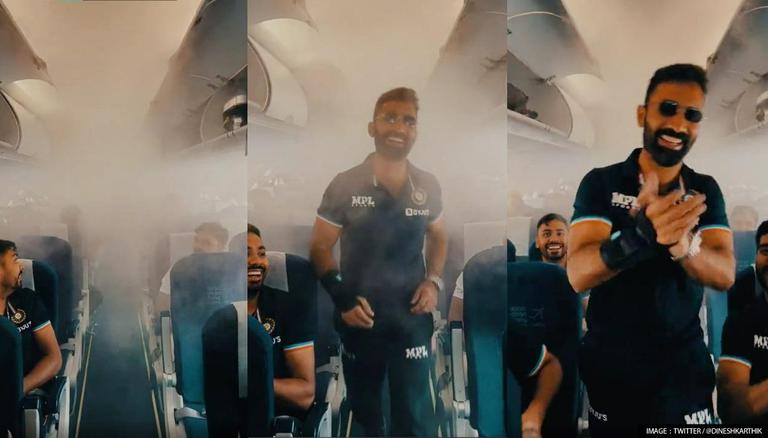 
Indian cricketer Dinesh Karthik is known for his charming personality on and off the field, as he stamps his authority as a finisher on the ground, and shares interesting posts on social media for his fans to rejoice. The 36-year-old is currently a part of India’s T20I squad for the series against South Africa and has played an important knock so far. As the Indian team traveled to Rajkot for the 4th T20I of the 5-match series on Friday, a video shared from their flight by the wicketkeeper-batsman has sent Twitter into a meltdown.

In the viral video, the veteran can be seen emerging out of the mist-like vapour often seen in flights, making a stylish entrance, while the entire team cheers to hype him up. Karthik used an interesting caption to share the video, and said, “Roll no.1 coming out of viva room be like…” to refer to some classmates react in educational institutions after the first person comes back the viva exams. The video posted on Thursday has already amassed over 340K views on Twitter. While the hilarious video attracted reactions from cricket fans on social media, Karthik’s Indian Premier League (IPL) franchise, Royal Challengers Bangalore (RCB) re-shared the video with an interesting caption.

Watch Dinesh Karthik's video and check the reactions that followed:

Roll no.1 coming out of viva room be like... pic.twitter.com/fowhrPghBo

The best thing we've seen on the internet today! 😄

Meanwhile, reacting to the video, one of the fans on Twitter compared Karthik’s appearance to that of legendary Indian actor Rajnikanth. ”DK's Entry Scene was almost like the God of Style himself #Rajnikanth !! Swag - Same to same! Style - Same to same! Energy - Same to same! (sic)” the fan wrote.

How did the fans react to the video?

DK's Entry Scene was almost like the God of Style himself #Rajnikanth !!! 🔥 🔥 🔥

Roll no.1 must be the topper, that's why he's looking so happy after coming out of viva room 🤣🤣

On the game front, Karthik has been great for India in the ongoing series, despite getting limited opportunities to bat. He played a knock of 30 runs in 21 balls during the 2nd T20I at Cuttack last week. Though Indian lost the match by four wickets, Karthik’s individual score became the talking point about the match as he took India’s score from 98/5 in 13.5 overs to 148/6 in 20 overs.

READ | Rahul Dravid opens up on Dinesh Karthik's role in Team India; 'With Dinesh, it is clear'

Karthik made a comeback into the India squad for the series against South Africa after a gap of three years, courtesy of his performance for Royal Challengers Bangalore in IPL 2022. He finished the season as one of the top run-scorers for RCB while essaying the role of a finisher. He hit 330 runs in 16 games for RCB at a strike rate of 183.33 and an average of 55.00. Following the conclusion of the Proteas’ tour, Karthik will travel to Ireland with Team India for the two-match T20I series against Ireland.