Virender Sehwag took a jibe with a sarcastic comment in which he asked if to was ball tampering done by England or COVID preventive measures. 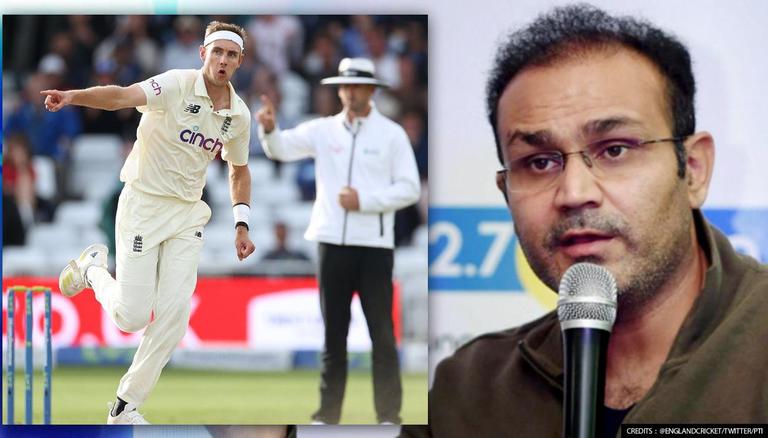 
The England vs India 2nd Test at Lords is heading towards an exciting finish with just one day of cricket left in the match.  After giving away a slender lead to England in the first innings, Team India fought back and by the end of Day 4 had managed to take 154 run lead thanks to Ajinkya Rahane's 61 runs and a fighting knock of 45 runs from Pujara. The Day 4 of the second Test also witnessed yet another incident in which two England cricketers were suspected to be involved in ball tampering.

Social media was buzzing on Sunday after two England cricketers Rory Burns and pacer Mark Wood were caught on camera passing the ball to each other using their shoes. Burns, who was wearing a shoe with spikes, can be seen stepping onto the ball. While fans and commentators raised concern over the stamping incident, England pacer Stuart Broad defended the actions of his teammates.

Broad in one of his tweet said that Mark Wood was attempting to nutmeg Burns by tapping the ball through his legs but he missed the attempt and accidentally kicked the ball. He even said that rather than taking a screenshot of the image it was better to watch the video.

READ | India vs England: Pujara's partnership with Rahane gives India something to cheer for

My comments are- Woody tried to nut meg Burnsy by tapping the ball through his legs (a very common occurrence) & he missed and kicked the ball there by accident. Instead of screenshotting the pic, watch the video- quite plain & easy to see

However former opener Virender Sehwag took a jibe with a sarcastic comment in which he asked if to was ball tampering done by England or COVID preventive measures.

Recap of Day 4 in England vs India 2nd Test

India lost in-form opener KL Rahul early following a brilliant delivery from Mark Wood which caught the edge of the opener's bat and went into the gloves of Jos Butler. Rohit Sharm was also looking brilliant with the bat before he was dismissed while trying to pull a short pitch delivery. Kohli (20 off 31) made a promising start before poking at a wide Sam Curran delivery to leave his team in deeper trouble at the stroke of lunch.

With their in-form openers and skipper Virat Kohli back in the hut at 55 for three and India effectively ahead by only 28 runs, Pujara (45 off 206) and Rahane (61 off 146) thrived under tremendous pressure to bat for almost 50 overs for a 100-run stand, taking the game to day five. Both Pujara and Rahane, who were desperately searching for runs, showed the grit and determination that they are known for to get back among the runs. They might not have scored big hundreds but the amount of balls they consumed kept the visitors in the game.

Rahane got a life on 31 when he was dropped by Jonny Bairstow off Moeen Ali. When bad light forced early stumps on day four, India reached 181 for six, leading England by 154 runs. Rishabh Pant (14 batting off 29) will need some support from the long Indian tail to add some valuable runs on the fifth morning.