The Board of Control for Cricket in India (BCCI) astonished fans around the world on Wednesday when they decided to sack Virat Kohli as the captain of the side. 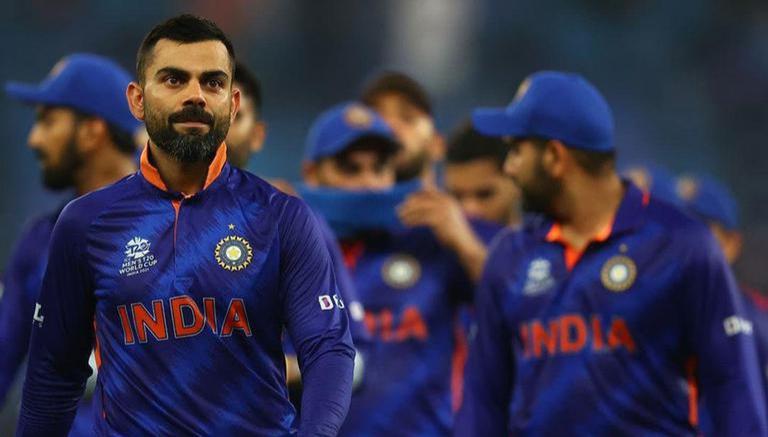 
The Board of Control for Cricket in India (BCCI) gave a shocker to fans across the world on Wednesday when they decided to sack Virat Kohli as the captain of the side.

Rohit Sharma was named the skipper instead, with BCCI not releasing any statement to address the reasons for removing Kohli from his leadership position. Netizens were unhappy with Kohli's treatment, with many insisting that he deserved more respect.

One netizen explained how heartbroken they were to see Virat Kohli being sacked as the ODI captain via two separate tweets. The fan stated that both Sourav Ganguly and MS Dhoni had fellow team players by their side but that Kohli 'has no one.' The social media user also mentioned the scores of the 33-year old in the last five matches to perhaps cite how influential he still has been to the team.

READ | Virat Kohli ODI captaincy: Why did BCCI give him '48-hour ultimatum'?

Ganguly has Sachin.
Dhoni has Kohli.

But Virat Kohli has no one.

And You can understand now. https://t.co/Ddd0oGYaDa

Virat Kohli expressed his desire to lead Indian team in ODI World Cup 2023 in India some months ago.

Another fan stated that they were unhappy with the way Kohli was treated as he had a 'great record as ODI captain. They stated that the 33-year old deserved better as he 'served the country with full emotion.'

READ | Was Virat Kohli relieved of his ODI captaincy due to 'trust issues' in the dressing room?

#ViratKohli removed as ODI Captain. Is this way we treat a player who has a great record as ODI Captain and has captained just a single ODI world cup so far. My full support to @imVkohli bhai. He has served the country with full emotion but is cut down here by politics #odi #BCCI pic.twitter.com/8oLVmKONVr

Similarly, another Twitter user was also sad about how BCCI treated Kohli, who had 'carried the team for years.' The fan insists that the 33-year old deserved better, stating that BCCI should have at least put up 'a thank you tweet.'

This is how u treat the player who carried the team fr years @bcci ?? #ShameonBCCI pic.twitter.com/lBSZBkHWcr

Meanwhile, another fan was delighted to see Rohit Sharma appointed as Team India's captain, but he too felt for Virat Kohli. The netizen believed that the 33-year old 'gave his heart and soul for the team, both as a player and as a captain.' The user feels that he 'deserved a better farewell tweet from BCCI.'

From No Overseas 100 to The Temporary Captain, Rohit has came a long way
He Deserved that role👏

But No offence to Virat Kohli, This guy gave his heart and Soul for the team Both As a player and as a Captain
But he Deserved a better farewell tweet from bcci, #ShameOnBcci pic.twitter.com/QDmWrwvMYR

Meanwhile, some other reactions can be seen below.

Highest win% as a test Captain at home :

This is the way BCCI treats the two world's best batsman ever born in the cricketing world!#ViratKohli pic.twitter.com/GIuTAR5TqM

Was Virat Kohli sacked due to trust issues?

According to PTI, there were trust issues and communication gaps with Virat Kohli as captain. Meanwhile, Rohit Sharma was seen as a player who could guide the younger generation in a far more efficient way. As per various media reports citing PTI as a source published on September 16, a former cricketer said,

"The problem with Virat is his communication. In the case of MS (Dhoni), his room would be open 24x7 and players could just walk in, play the PS4, have a meal and let their hair down and if required talk cricket. Beyond the ground, Kohli is literally incommunicado. Rohit has shades of MSD but in a different manner. He takes the junior players out for meals, gives them a friendly pat on the back when they are down and knows the mental aspects of a player's make-up inside out.

The biggest problem with Virat has always been trust issues. He speaks about clear communication but where he had lost respect as a leader is lack of communication."