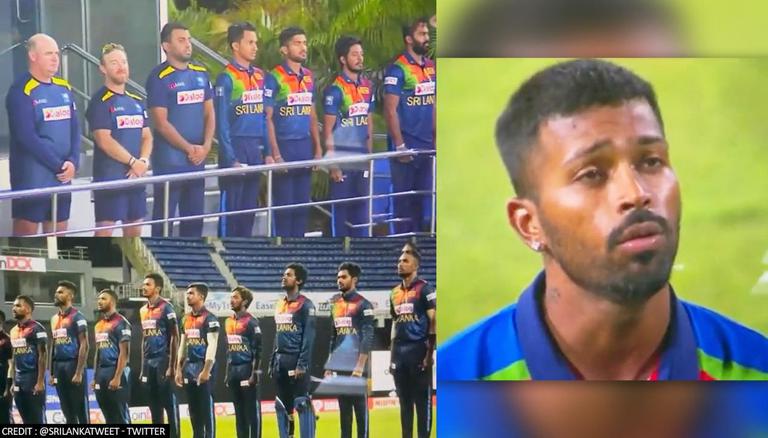 
Ahead of the T20I match between India and Sri Lanka scheduled to take place at the R. Premadasa Stadium in Colombo on Sunday, players from both countries gathered for the national anthem ceremony. It was then that some eagle-eyed fans spotted something unusual during the customary proceedings as the camera panned on the Indian Cricket team. Indian cricket team’s all-rounder Hardik Pandya was caught singing Sri Lanka’s national anthem at the venue.

National anthems played during the sports are symbolic of the nation that the teams represent. It is also a proud moment when players sing along as a sign of respect. The common saying goes, “Sing, stand, or hand on heart” when the national anthem plays as a part of the game before the kick-off. It is also a big morale booster to the teams to claim victory for the sake of the country that they originate.

However, Pandya who was caught chanting the opponent country’s national anthem attracted a barrage of reactions on Sunday. The short 7-second footage has now gone viral and has widely been shared across all social media platforms. “Is it just me that saw Hardik Pandya singing the SL national anthem, then?” A Twitter user wrote while sharing the video with a hashtag #SLvInd

Is it just me that saw @hardikpandya7 singing the SL national anthem, then? #SLvInd pic.twitter.com/TuALbiRFu4

Internet and fans dropped mixed reactions as some called the cricketer “Multi-talented,” while others responded, “Did he forget he was Indian?” A user wrote, “What’s wrong??” Many seemed to appreciate Pandya’s gesture taking his singing in a positive light as a token of respect for the other country. “Hardik Pandya trying to lip-sync to the Sri Lankan anthem is priceless,” wrote a fan. Another stated, “Hardik Pandya singing Sri Lanka’s national anthem is the best thing i have seen so far. It’s all about respecting the nation.”

READ | Who are the '3 Idiots' of World Cricket? Hardik Pandya names himself & two surprise picks

India and Sri Lanka kick-started the first of the three-match T20I series on July 25 at R Premadasa Stadium in Colombo. After a series-clinching performance against a second-string Sri Lankan side, India is playing the first T20I of the tour and is predicted to win it to secure an early lead in the series. The match began at 8:00 pm Indian Standard Time (IST) and is being live broadcasted by the Sony network on the digital feed on the Sony Liv app.

But does he know SL's National Anthem? 🙂

After singing national anthem of Srilanka, Hardik Pandya is also playing for them.

Hardik Pandya today:
- Gifted one of his bats to debutant Chamika
- Sang Sri Lankan national anthem
- Got out for a poultry score
- Dropped a sitter off Minod

Gearing up to become the next common candidate? 🦢😜#SLvIND

Hardik Pandya was singing our national anthem and also he gifts debutant Chamika Karunaratne one of his bats before the match. @hardikpandya7
What a gesture!❤🙌#SLvsIND

@hardikpandya7 is a real gentleman 🙌.. Gave his spare bat to the debutant Chamika, Sang our national anthem and now he walked away before the umpire gave the decision. 👌👌

National Anthem of Sri Lanka is so good that Hardik Pandya is also singing it with them.#INDvSL