How Did Mayank's Didn’t Miss But This One Against Elgar’s Missed?: Aakash Chopra

Former Indian opener Aakash Chopra has spoken out about the DRS issue that erupted on the second day of the third Test match between India and South Africa. 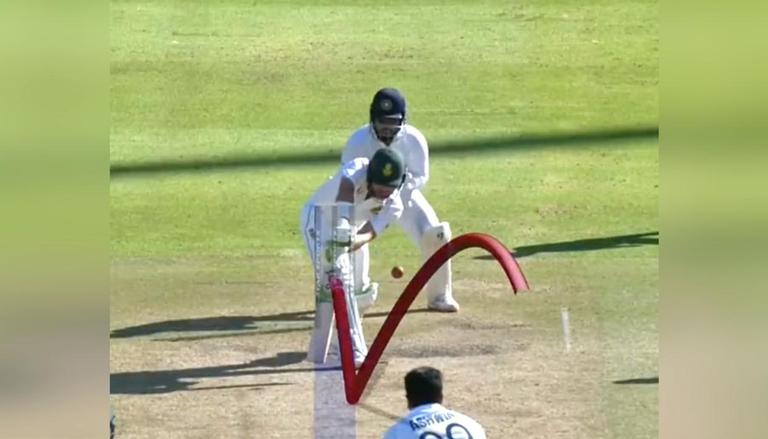 
Former Indian opener Aakash Chopra has spoken out about the DRS issue that erupted on the second day of the third Test match between India and South Africa. Chopra expressed his dissatisfaction with the ball-tracking technology citing two controversial dismissals in the ongoing series. He claimed that when Mayank Agarwal was controversially dismissed in the first Test, the ball-tracking showed the ball hitting the stumps, but the ball appeared to be travelling past the stumps to the naked eye. Chopra went on to query how the ball-tracking system missed Dean Elgar's stumps when it looked for them.

"Can’t wrap my head around the ball-tracking technology for two dismissals in this series —how did Mayank Agarwal’s didn’t miss in the first Test. And how did this one against Elgar’s miss? Bewildered," Chopra said on Twitter.

The controversy erupted after Ravichandran Ashwin hit Elgar on the pads and the on-field umpire called it out LBW. Elgar went upstairs to challenge the decision in hope that he might survive to play the last few overs of the day. The ball tracking showed the ball going over the stumps when to the naked eye it clearly appeared hitting the stumps. This enraged the Indian players, who then started blasting the home broadcaster for the gaffe. "Focus on your team while they shine the ball. Not just the opposition. Trying to catch people all the time," Kohli was heard saying on the mic after Elgar received a lifeline.

Elgar, however, was eventually dismissed by Jasprit Bumrah for 30 runs. Keegan Petersen will now be joined by Rassie van der Dussen when the play resumes on Day 3. South Africa will continue batting at the overnight score of 101/2. The Proteas now need 111 runs to win the game, while the visitors require 8 wickets to do the same.

READ | IND vs SA: Fans target Rahane and Pujara after another poor performance in 3rd Test

Earlier in the match, India won the toss and elected to bat first. India posted a total of 223 runs courtesy of a superb 79-run knock from skipper Virat Kohli. India then restricted South Africa for 210 runs, going into the second innings with a lead of 13 runs. South Africa bowlers struck early in India's second innings. However, Virat Kohli and Rishabh Pant forged an important partnership to take India to a respectable total. Pant even registered a century to help India score 198 runs in the second innings.

WE RECOMMEND
IND vs SA: Virat Kohli involved in war of words with Dean Elgar before DRS controversy
Virat Kohli's Team India become 1st team in Test history to register this unwanted record
India vs South Africa, 3rd Test: How has India fared at Cape Town in the past?
IND vs SA: Virat Kohli's exclusion from playing 11 for 2nd Test leaves netizens surprised
Virat Kohli recalls MS Dhoni's words when talking about Pant's shot selection in 2nd Test
Listen to the latest songs, only on JioSaavn.com