Kohli has been rewarded for scoring his first ODI hundred in more than three years in a match against Bangladesh recently, while Kishan made huge gains following his fastest ODI double-century in the same match. 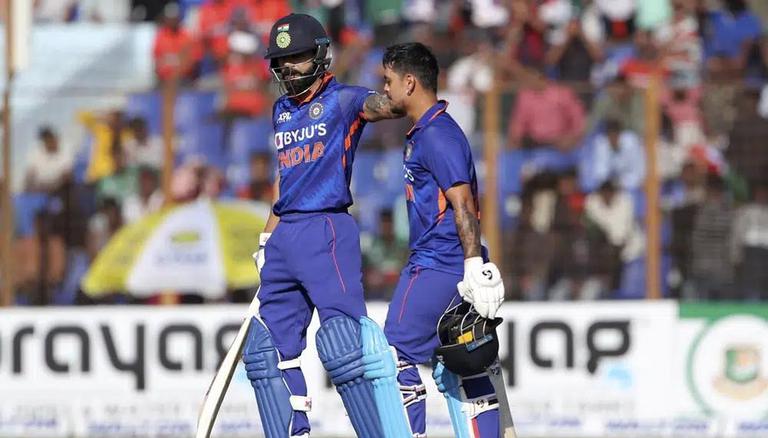 Kohli has been rewarded for scoring his first ODI hundred in more than three years in a match against Bangladesh recently, while Kishan made huge gains following his fastest ODI double-century in the same match.

The former India captain had scored a 91-ball 113 in the third and final ODI against Bangladesh in Chattogram on Saturday. It was his first hundred in the 50-over format since August 2019.

Left-handed opener Kishan, on the other hand, had slammed a record-breaking 210 off 131 balls.

Shreyas Iyer too advanced from 20th to 15th in the batting chart following his score of 82 in the second match of the series in Dhaka.

Among bowlers, Indian pacer Mohammad Siraj gained four places to 22nd in the ODI ranking for India, while Bangladesh spin allrounder Shakib al Hasan was up one place to eighth.

Bangladesh’s Mehidy Hasan Miraz has moved up three places to third in the all-rounders’ list.

In the Test rankings, Aussie batter Marnus Labuschagne consolidated his position at the top with a career-best 937 rating points after compiling his third three-figure knock in the two-match series against the West Indies.

He achieved the rare feat of scoring a double-century and a century in the same Test during the first match in Perth last week.

The 28-year-old now has a lead of 62 rating points over second-placed Steve Smith and is tied with Kohli for the 11th-best rating points ever in the list led by Australia great Don Bradman, who went as high as 961 rating points.

Smith is second in that list with 947 rating points, while Ricky Ponting (fifth with 942) is the third Australian in the top 10.

Travis Head is back in the top 10 after his Player of the Match effort of 175 and 38 not out helped record a 419-run win over the West Indies to consolidate his team’s top position in the WTC points table.

Head has gained six slots to reach seventh position, in the process overtaking the India pair of Rohit Sharma (10th) and Virat Kohli (12th) among others.