Shakib Al Hasan, who was banned by the ICC for breaking the anti-corruption code, has congratulated his team after their clinical victory over India

Bangladesh cricketer Shakib Al Hasan, who was handed a two-year ban from the International Cricket Council (ICC) for breaking the anti-corruption code, has congratulated his team after their clinical victory over India by 7 wickets. Shakib wrote on his facebook handle "What an amazing team performance under tremendous pressure! Congrats boys! You made the entire nation proud.". 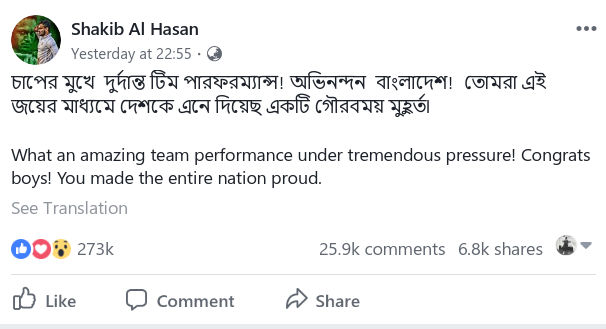 Bangladesh had suffered a massive blow just a couple of days before Bangladesh were scheduled to travel to India as their Test and T20I skipper  Shakib Al Hasan who was their main player was slapped with a two-year ban by the ICC for breaking anti-corruption code. Tamim Iqbal’s decision to pull out of the tour to be with his pregnant wife only added to the team's miseries as the team was left without two of its most experienced players.

Mahmudullah was named as the new captain of the T20I side. India were the firm favourites to win the first game. The history was also in India’s favour as prior to the Delhi T20I, both the teams had played 8 T20Is and India had emerged victorious on eight occasions. However, all those setbacks and history made little difference as Bangladesh came up with a spirited performance to defeat India and register their first win in T20Is over Men in Blue.

That's that from Delhi. Bangladesh win the 1st T20I by 7 wickets and go 1-0 up in the 3-match series.#INDvBAN pic.twitter.com/z2ezFlifYx

Bangladesh skipper Mahmudullah Riyad won the toss and decided to bowl first. India's batting never really found the momentum as wickets kept tumbling on this two-paced pitch. However, some late hitting from Sundar and Pandya got India to a respectable total of 148. Bangladesh chased it down convincingly with Rahim starring for them with the bat scoring 60 of 43 deliveries as Bangladesh chased it down with three balls to spare.