Jimmy Neesham has revealed an interesting WhatsApp chat where Ajaz Patel's 10-wicket haul against India during the Wankhede Test was predicted 3 hours prior. 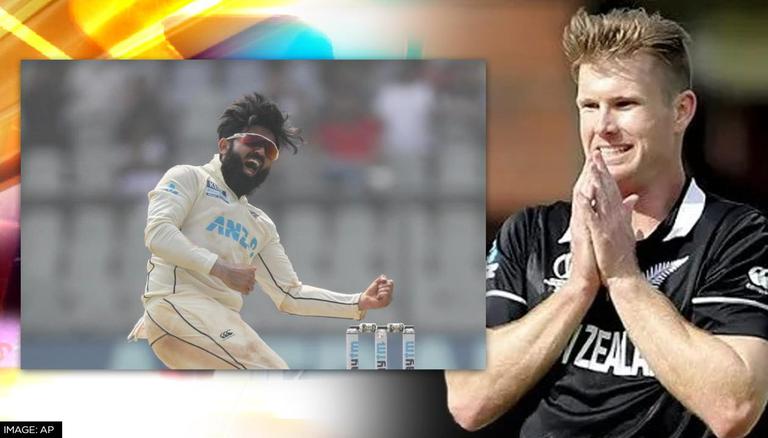 
New Zealand all-rounder James Neesham took to his official Twitter handle on Saturday, following Kiwi left-arm spinner Ajaz Patel’s 10-wicket haul in the first innings of India vs New Zealand, second Test match at the Wankhede Stadium in Mumbai. Courtesy of his 10 wicket haul, Ajaz scripted history by becoming the third cricketer after Jim Laker in 1956 and Indian legendary wrist spinner Anil Kumble to clinch all ten wickets of the opposition in an innings. Meanwhile, on one hand, where Ajaz started Day 2 of the Test with four wickets to his credit, allrounder Neesham was involved in a WhatsApp where it was already predicted that Ajaz Patel would achieve the incredible feat.

Amidst the social media storm generated by the incredible achievement by Ajaz Patel, Jimmy Neesham tweeted a screenshot of a Whatsapp chat and captioned it by saying he had predicted the same in a private group, 3 hours before Ajaz completed the 10-wicket haul. In the WhatsApp chat, one of the group members can be seen saying that Patel is not much behind from taking 10 wickets, while Neesham replies to him by saying Jim Laker must be nervous. Further in the chat, the group members can be seen hailing Neesham for his prediction that Ajaz Patel might take all 10 wickets. 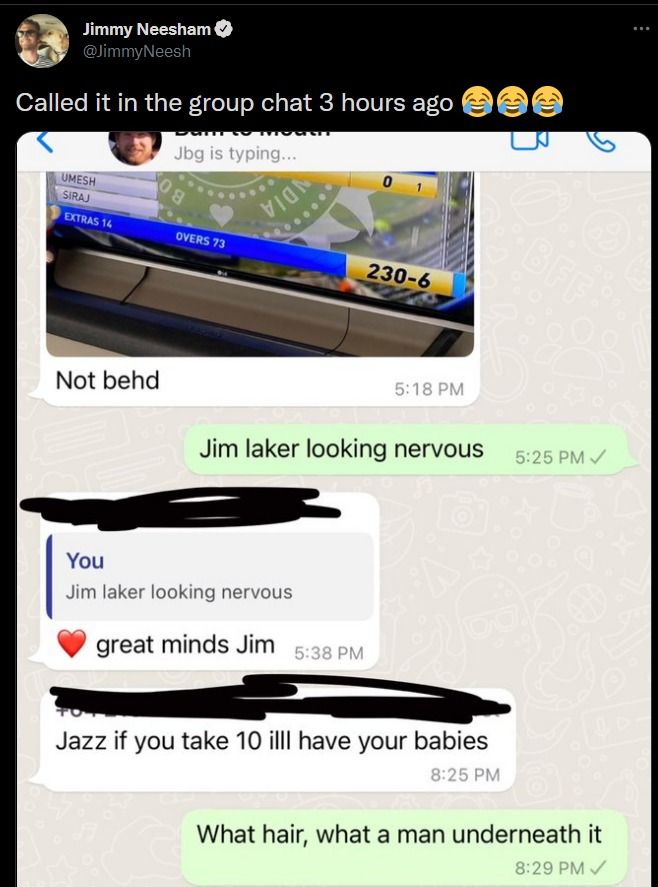 Courtesy of the ten-wicket haul by Ajaz, India were restricted on the score of 325/10 in the first innings of the match. However, as the Kiwi started their batting innings riding high on the celebration by Ajaz, the batting line-up suffered a shocking collapse. Kiwi openers Tom Latham and Will Young walked back to the pavilion in the fourth over of the innings, as Siraj opened the wickets for India in stellar fashion.

Siraj produced a fantastic effort to bowl out Ross Taylor in his next over as Axar Patel removed Daryl Mitchell in the first ball of his second over. The Kiwis continued to struggle with the bat as Ravichandran Ashwin removed Henry Nicholls in the first ball of his spell, while Jayant Yadav dismissed Rachin Ravindra in his first over before the Tea was called. R Ashwin removed Tom Blundell and Tim Southee after the tea in the same over. Following a stellar performance by India's bowling department, the Black Caps were restricted to 62/10 at the end of the innnings.