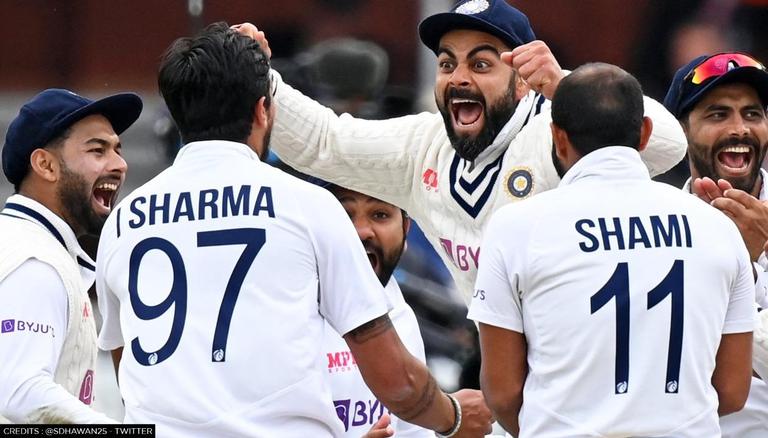 
India's world-class pace attack pulled off an incredible heist with the bat and then a magnificent performance with the ball to decimate England by 151 runs in the second Test on Monday, 16 August 2021. The fifth day at the hallowed Lord's was as good an exhibition of Test cricket with India bowling out England for 120 as they tried to bat it out without going for a chase of 272 in 60 overs.

It was a match where odds were in favour of England but Mohammed Shami (56 no & 1/13 in 10 overs) and Jasprit Bumrah (34 & 3/33 in 15 overs) played innings of their lives and then rocked the England top-order before Ishant Sharma (2/13 in 10 overs) and Mohammed Siraj (4/32) played their part to perfection to give the visitors a 1-0 lead in the five-match series.

Brilliant from #TeamIndia as they beat England by 1⃣5⃣1⃣ runs at Lord's in the second #ENGvIND Test & take 1-0 lead in the series. 👍 👍

This is India's third Test match win at Lord's having won earlier in the 1986 and 2014 series and they now have six points in the World Test Championship. First Shami and Bumrah achieved the unthinkable of batting England out of the contest by conjuring a record stand of 89 which took the team's total to 298 for 8 and made the target of 272 in two sessions look fairly impossible.

Apart from this Virat Kohli has now become the third captain to win a Test match at the Lord's Cricket Ground. Kapil Dev won in 1986, MS Dhoni won in 2014 and now Virat Kohli has won in 2021.

During the post-match presentation, Virat Kohli said, "Super proud of the whole team. The way we stuck to our plans after being put in. The pitch didn't offer much in the first three days. First day was the most challenging. The way we played in the second innings after being put under pressure - Jasprit and Shami were outstanding. We had the belief we can get them out in 60 overs."

"The batting coach has worked really hard with the boys. They have the desire in them to do well for the team. We know how priceless those runs are. Have been a part of the winning Test last time under MS. That was pretty special. But this one, to get a result in 60 overs is quite special. And especially with someone like Siraj playing for the first time at Lord's and he bowled superbly," added Kohli

READ | 'Language will land him in trouble': Stuart Broad warns Kohli on verbal war with Anderson