As India and Bangladesh geared up for their first D/N Test, special coins were unveiled to mark the occasion. The match details are imprinted on the coins.

History is set to made as India gear up to play their first Day/Night Test match at the Eden Gardens in Kolkata from November 22 to 26. The encounter also will be the first time a Day/Night Test match is being played in India. To mark the occasion, special gold-plated coins were unveiled.

Pictures of the special coins have surfaced. Placed in brown box, the gold coin looked fitting for the historic event. In one of the coins, ‘India’s 1st pink ball test’ is written. In another coin, the logo of the Cricket Association of Bengal and other details of the match like India vs Bangladesh, Eden Gardens, Kolkata, 22nd to 26th November are imprinted. 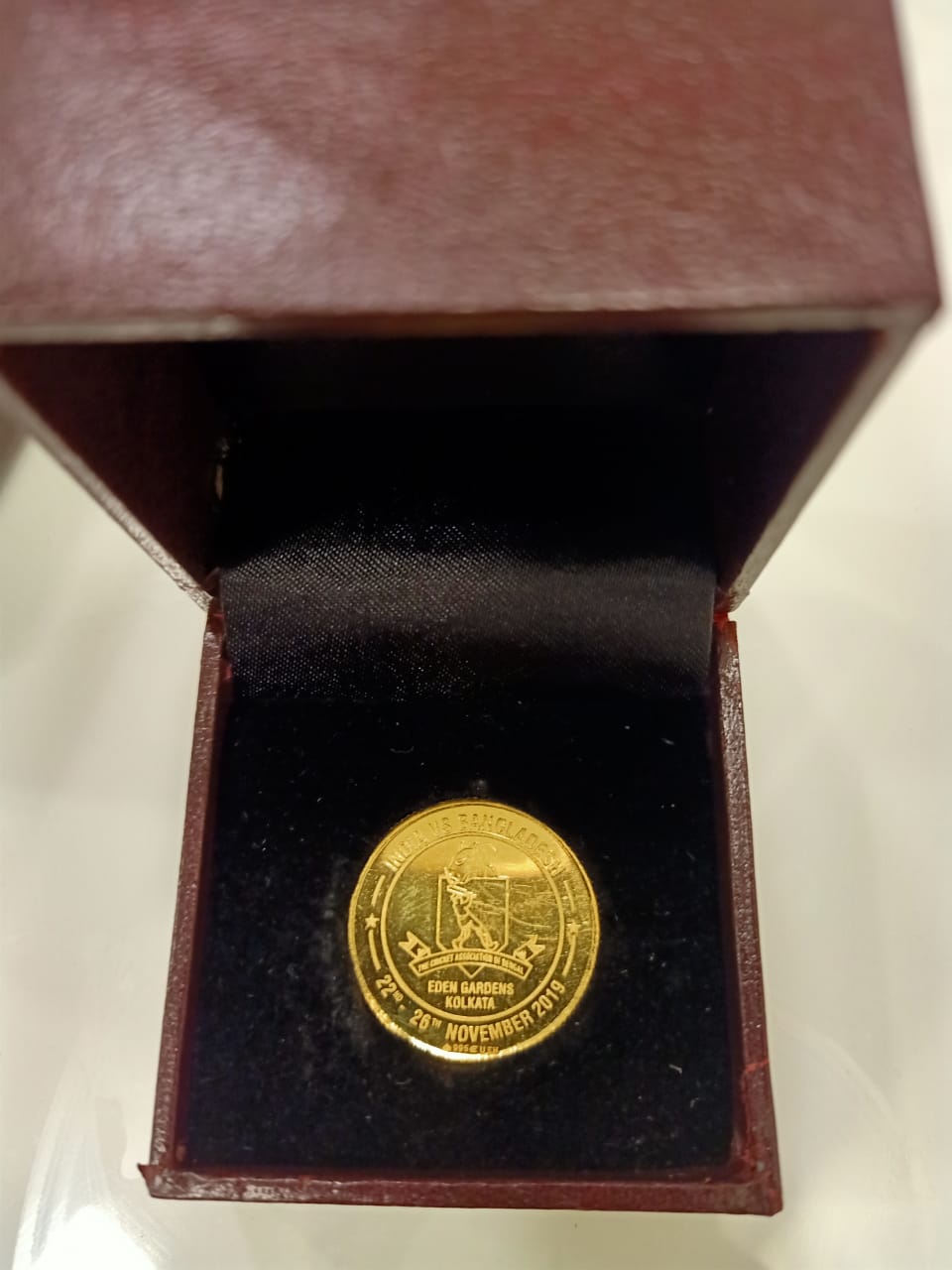 Earlier, Indian Vice-Captain Ajinkya Rahane too had expressed his excitement for the first pink ball Test for India. He had shared a snap where he is sleeping with the pink ball beside her, and wrote that he was dreaming about it. His Captain Virat Kohli had commented ‘nice pose’ on it, while Shikhar Dhawan had quipped how he had clicked the ‘dream’.

The India vs Bangladesh Test will be the second and final Test of the ongoing series. It is set to be the first D/N Test for both India and Bangladesh. The match is going to be only the twelfth D/N Test to be played in the history of cricket. The first D/N Test match was played between Australia and New Zealand at Adelaide in November-December 2015. Since then, teams like Pakistan, West Indies, South Africa, England, Sri Lanka and Zimbabwe have also played D/N Tests.

The Indian pacers were particularly on fire in the match. Mohammad Shami was the pick of the bowlers, with seven wickets in all. Ravichandran Ashwin picked up 6 wickets, Umesh Yadav bagged 5 wickets and Ishant Sharma got 4 wickets.

READ: D/N Test May Be Part Of Answer To Reviving Traditional Format: Taufel

PEOPLE HAVE PLEDGED SO FAR
India vs Bangladesh: India aim to get better at batting first in T20Is
India vs Bangladesh: 5 major talking points from the first T20I
India vs Bangladesh: Most exciting T20I matches between the nations
India vs Bangladesh: Mayank speaks about his double ton & fitness routine with Virat Kohli
India vs Bangladesh: Spinners have a big role to play, says Sundar
Darren Sammy likely to be conferred with Pakistan citizenship after PSL heroics: Report
Ind W vs AUS W live: Why was Ashleigh Gardner given not out to deny Poonam Yadav a wicket?
VVS Laxman & Mohammad Kaif hail India eves for a 'Magnificent Beginning' in Women's T20 WC
DO NOT MISS
LAW MINISTRY ON UPHAAR FIRE CASE
MOTERA STADIUM INAUGURATION
PM REITERATES PEACE MESSAGE
KAMAL NATH ASKS FOR 'SABOOT'
PRASHNAT KISHOR IN AAP
RAUT LAMBASTS ON WARIS PATHAN