As India vs England Day 3 of the second Test is underway at the Lord's Cricket Ground, English fans from the stands threw wine cork at KL Rahul. 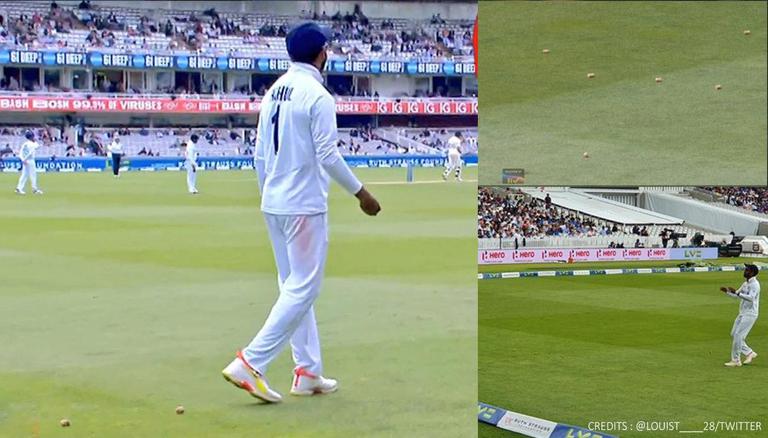 
As India vs England Day 3 of the second Test is underway at the iconic Lord's Cricket Ground, a shameful incident occurred at the 'Home of Cricket'. As skipper Joe Root and Jonny Bairstow are playing solid in the middle, English fans from the stands threw a wine cork at Team India's opener, KL Rahul, who was fielding at the boundary line when English fans from the Lord's stand threw a wine cork at him. This gesture of the English fans fumed Team India's skipper Virat Kohli who was fielding in the slips. Then, angry Virat Kohli gestured KL Rahul to throw it back to the stands. Reportedly, Team India complained to the umpires after the wine cork incident. Notably, during India vs England first Test,  a few English fans reportedly hurled racial abuse at Indian spectators and players.

Think India have complained to the umpires about the champagne cork that was thrown at KL Rahul.

If same thing were happened at Indian ground, Our commentators would've cried for Cultural, Upbringing & education for Indians#INDvsENG #ENGvIND

Virat Kohli from the first slip asking KL Rahul (via hand gestures), who's on the boundary line if bottle cork's were thrown at him.
He then asks him to throw it back to the buffoon in the crowd.#ENGvIND

Earlier, on Day 2 of the first Test, a few English supporters shouted racial comments towards Indian spectators and insulted players, including Mohammed Shami and Virat Kohli, according to a 31-year-old British-Indian woman who had gone to Nottingham to watch the series opener. The woman took to Reddit to share her personal experience from the stands at Trent Bridge.

READ | KL Rahul opens up on smashing return to Test cricket, says 'getting dropped was hurtful'

Following the incident, the woman and her family were shifted to a stand mostly populated by Indian spectators, but a few English fans from the other side kept chanting "Delta", referring to the Indian variant of the COVID-19 disease.