Smriti Mandhana then helped the Women in Blue chase down a low target of 66 runs by scoring a spectacular 51 runs off just 25 balls. 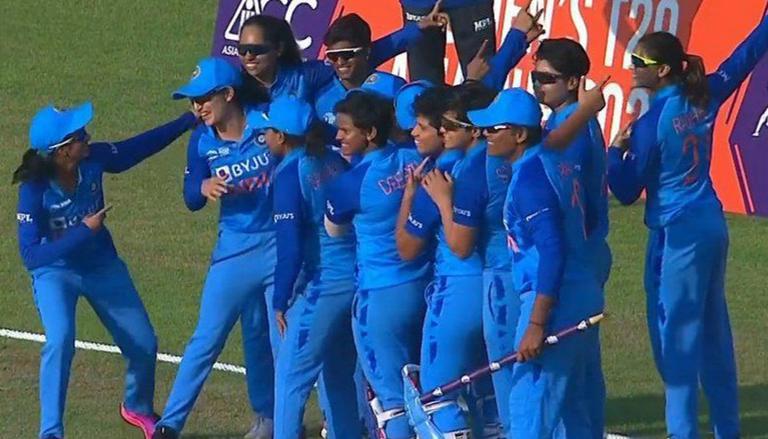 
India Women on Saturday defeated Sri Lanka Women by 8 wickets to win their record seventh Asia Cup title in Bangladesh. Renuka Singh was the pick of the bowlers from the Indian team as she registered a three-wicket haul in the game. Smriti Mandhana then helped the Women in Blue chase down a low target of 66 runs by scoring a spectacular 51 runs off just 25 balls. She smashed a six over wide long-on region to finish the game for India in style.

As soon as Smriti Mandhana hit the winning runs for India, her teammates erupted in huge celebrations, the video of which is going viral on social media. Indian players ran onto the field and uprooted the stumps to keep them as souvenirs of the cherished moment.

When it came to the game, Sri Lankan captain Chamari Athapaththu chose to bat first after winning the toss. The choice turned out to be incorrect as India quickly dismantled Sri Lanka's batting order to take five wickets during the powerplay alone. Renuka Singh took three wickets for only five runs as India bowled out Sri Lanka for 65/9 in 20 overs. Sneh Rana and Rajeshwari Gayakwad each claimed two wickets.

None of the batters from Sri Lanka were able to score more than two runs, with the exception of Oshadi Ranasinghe and Inoka Ranaweera. Ranaweera and Ranasinghe scored 13 and 18 runs, respectively. Mandhana remained unbeaten at 51 off 25 balls, while Harmanpreet Kaur went 11 red-ink. Renuka Singh won the player of the match for her outstanding bowling effort. India, meanwhile, easily chased down the target, winning the match in just 8.3 overs for a record-breaking seventh Asia Cup victory.