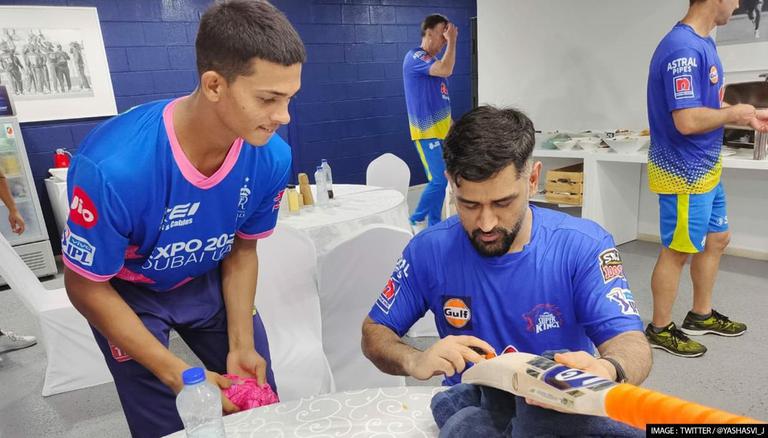 
Rajasthan Royals opener Yashasvi Jaiswal has been in fine form in the ongoing second leg of IPL 2021, and he showcased his class once again when his side faced the Chennai Super Kings (CSK) on October 2.

The 19-year old batsman scored a fine half-century to help his side beat the MS Dhoni-led side. After the match, Jaiswal received a signature on his bat from the CSK captain himself.

Yashasvi Jaiswal was elated to get his bat signed by MS Dhoni as he took to his Twitter handle to post a picture of the same. The 19-year old called the CSK skipper 'an inspiration' and added that it was a great moment to meet him.

READ | Yashasvi Jaiswal opens up on his interaction with Virat Kohli; 'I wanted to know...'

What a moment meeting the legendary @msdhoni sir and greatly elated by getting his signature on my bat. Always an inspiration! 🙌🙏 pic.twitter.com/pWsoxsFNzj

Having batted first, Chennai Super Kings seemed to have set the Rajasthan Royals an outstanding target of 190 runs to chase in the 20 overs. Ruturaj Gaikwad hit a fantastic unbeaten century off just 60 deliveries. Meanwhile, Faf du Plessis (25), Moeen Ali (21) and Ravindra Jadeja (32) contributed with individual cameos. On the other hand, Rahul Tewatia was the pick among the RR bowlers as he picked up three wickets.

In response, RR got off to an excellent start as a result of their openers. Evin Lewis scored 27 runs off just 12 deliveries before he was dismissed by Shardul Thakur in the final over of the powerplay. Meanwhile, Yashasvi Jaiswal scored 50 runs off just 21 balls. After the wickets of the two openers fell, it was RR captain Sanju Samson and Shivam Dube who helped the side get over the line.

Samson scored 28 runs off 24 deliveries, while Dube scored an outstanding 64 runs off just 42 balls. Even though RR won the game, they could not stop Gaikwad from winning the man of the match award for his fantastic 100.

WE RECOMMEND
IPL 2021: KKR vs SRH head-to-head stats, key players, latest form and more
IPL 2021: DC skipper Rishabh Pant terms THIS Indian youngster as 'find of the season'
IPL 2021: Faf du Plessis collides with Mustafizur Rahman while going for a run; WATCH
IPL 2021 RCB vs PBKS Live Streaming: How to watch IPL 2021 LIVE in India, UK and US?
IPL 2021 RR vs CSK live streaming: How to watch IPL 2021 in India, UK and US?
Listen to the latest songs, only on JioSaavn.com