Chahal picked three wickets for 29 runs in the 4 overs that he bowled against Punjab, the best figure by an RCB bowler in the recently concluded match. 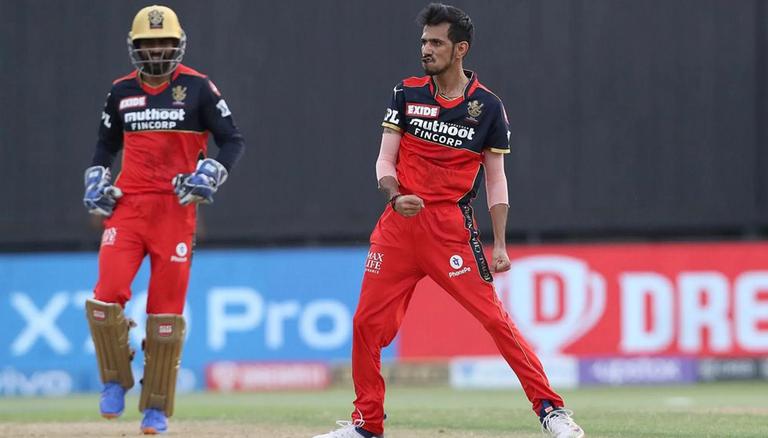 
The 48th match of the Indian Premier League 2021 edition saw Royal Challengers Bangalore (RCB) lock horns against Punjab Kings at Sharjah Cricket Stadium. The match ended in a win for RCB, courtesy of some brilliant individual performances by Glenn Maxwell and Yuzvendra Chahal. While Maxwell helped RCB with the bat in the first half, Chahal took the responsibility with the ball in the latter half, making it difficult for Punjab to chase down the target of 165 runs. Chahal picked three wickets for 29 runs in the 4 overs that he bowled against Punjab, the best figure by an RCB bowler in the recently concluded match.

Netizens have now taken to social media to laud Chahal for his spectacular performance on the field against Punjab Kings. Some people also highlighted how Chahal has delivered wickets for RCB in almost every match of the ongoing season. One individual went on to question Chahal's exclusion from India's T20 World Cup squad. A user claimed on Twitter that Chahal is still the "best leg spinner" in India. Here's how netizens are reacting on social media after Chahal's match-winning spell, which also helped RCB secure a playoff berth.

Once again chahal has been the game changer in the middle took set batsman wik and changed the game. Deserve all appreciation

Top class spell yet again by Yuzvendra Chahal. 3/29 in 4 overs. He's been in tremendous form in the UAE, knocking the doors for World Cup selection.

Absolute beauty by @yuzi_chahal to dismiss Sarfaraz...He has definitely knocked the door of selectors for T20 worldcup.....he was and he is no 1 spinner for India in white ball cricket ....#chahal #yuzi #sarfaraz #PBKS #PBKSvsRCB #RCB #BCCI pic.twitter.com/RCa9TpNl7f

RCB skipper Virat Kohli won the toss and chose to bat first against PBKS. RCB posted 164 runs on the board, courtesy of some contributions from Virat Kohli (25 runs), Devdutt Padikkal (40 runs), Glenn Maxwell (57 runs), and AB de Villiers (23 runs). Moises Henriques and Mohammed Shami were the only two Punjab bowlers who picked wickets in the game. Both pacers picked three wickets each in 4 overs. Henriques bowled an amazing spell, leaking just 12 runs in his 4 overs.

When Punjab Kings came to bat, openers KL Rahul and Mayank Agarwal forged a 91-run partnership together before the former was dismissed for 39 off 35 balls. Agarwal smashed 57 off 42 balls before he was removed by Chahal. The Indian leg-spinner then dismissed Nicholas Pooran and Sarfaraz Khan for 3 and 0 runs respectively. RCB managed to restrict Punjab for 158/6 in 20 overs, winning the match by 6 runs.

The Virat Kohli-led RCB has now become the third team in the ongoing edition of IPL 2021 to qualify for the playoffs. Chennai Super Kings and Delhi Capitals were the first two teams to secure a place in the knockout stage.

WE RECOMMEND
IPL 2021: Yuzvendra Chahal picks up gun ahead of RCB vs PBKS match; says 'My target is set
IPL 2021: KKR vs SRH head-to-head stats, key players, latest form and more
IPL 2021: Jason Gillespie counters Shane Warne, lends support to Ravi Ashwin
IPL 2021 RCB vs PBKS Live Streaming: How to watch IPL 2021 LIVE in India, UK and US?
IPL 2021 RR vs CSK live streaming: How to watch IPL 2021 in India, UK and US?
Listen to the latest songs, only on JioSaavn.com