Deepak Chahar on Thursday surprised his long-time girlfriend by proposing her on live television after their IPL clash against Punjab Kings (PBKS). 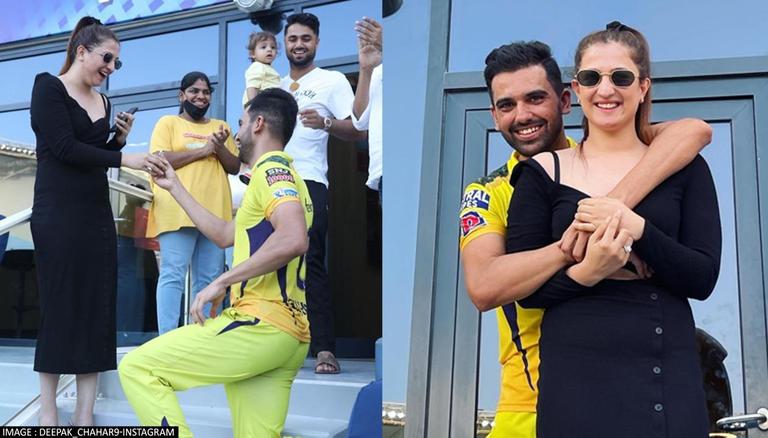 Deepak Chahar proposed to his partner after the match. Congratulations guys❤️💍 pic.twitter.com/8PEIDl2Agz

Chahar is the key bowler for CSK inside the powerplay, however, the 29-year-old failed to put up his best performance despite it later turning out to be one of his most memorable days. Chahar bowled four overs and picked 1 wicket for 48 runs. The Haryana player finished the game as the least economical bowler for his side as she leaked runs at an economy of 12.00.

As far as the match is concerned, PBKS registered an emphatic win over CSK on the back of an incredible inning by skipper KL Rahul. The Karnataka batsman scored an unbeaten 98 runs for PBKS to help his team win the game. PBKS won the match by 6 wickets with 42 balls to spare. Batting first, CSK were restricted by Punjab bowlers for 134/6 in 20 overs. Faf du Plessis remained the lone warrior for the MS Dhoni-led side as he scored 76 off 55 runs before being dismissed by Mohammed Shami.

MS Dhoni and Ravindra Jadeja scored some runs towards the backend of the first innings, but their slow effort could not even help CSK breach the 140-run mark. Arshdeep Singh and Chris Jordan picked two wickets each for PBKS, while Shami and Ravi Bishnoi picked one each. Meanwhile, Punjab Kings lost Mayank Agarwal early but KL Rahul, along with some small partnerships with Aiden Markram and Shahrukh Khan, single-handedly chased down the target. Rahul's 98 came off just 42 balls, including 8 sixes and 7 boundaries. He was adjudged the player of the match.