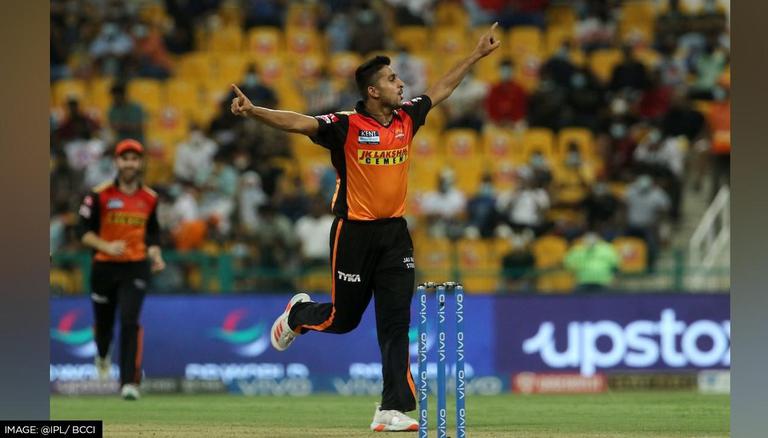 
Emerging pacer Umran Malik has made a tremendous impact ever since he announced his arrival in the Indian Premier League in grand fashion. However, he made headlines after bowling a lightning-fast delivery in the history of this year's tournament during the IPL 2021 game between Sunrisers Hyderabad and Royal Challengers Bangalore at Sheikh Zayed Stadium in Abu Dhabi on Wednesday.

Umran Malik achieved a new milestone during the southern derby against RCB. In the eighth over of the second innings,  he clocked at 153kmph as Bangalore's star batsman Devdutt Padikkal who was on strike had to face the thunderbolt. Even though the delivery did not earn him a wicket but Malik ended up breaking the Kolkata Knight Riders fast bowler Lockie Ferguson's 152.75 km record in the ongoing IPL 2021.

Umran Malik seemed to be breathing fire in that one over as he had delivered his previous three deliveries at speeds of 147, 150 and 152kmph, respectively before clocking the 153 mark.

Meanwhile, this is not the first time that Umran Malik has bowled such fiery deliveries. In fact, the young speedster had clocked a delivery at 150kmph speed during SRH's fixture against KKR last Sunday.  During his first match in the tournament, he bowled nine out of the ten fastest balls delivered by SRH bowlers in the current season, also making a mark by adding his name to the list of players with the fastest deliveries in IPL.

Coming back to the contest, the Sunrisers Hyderabad were restricted to 141/7 from their 20 overs after being put in to bat by the RCB skipper Virat Kohli. Opener Jason Roy top-scored for SRH with a 38-ball 44. In reply, Bhuvneshwar Kumar accounted for captain Kohli in the very first over but his opening partner Devdutt Padikkal soldiered on from the other end as he scored a vital 41. Bangalore lost the wickets of Daniel Christian and KS Bharat cheaply but, Glenn Maxwell kept them in the game with a quickfire 25-ball 40 before being run out by Kane Williamson.

AB de Villiers then took matters into his own hands and decided to finish things off in style. He clobbered Bhuvi for a huge six off the penultimate ball of the innings as the equation came down to six runs off the final ball. Nonetheless, it was the bowler who had the last laugh as he deceived the batsman and all ABD could manage was a single as the three-time finalists were finished at 137/6 from their 20 overs.