Anderson has played 161 Test matches for England since his debut in 2002 against Zimbabwe. Anderson is currently the 4th-ranked Test bowler in the world. 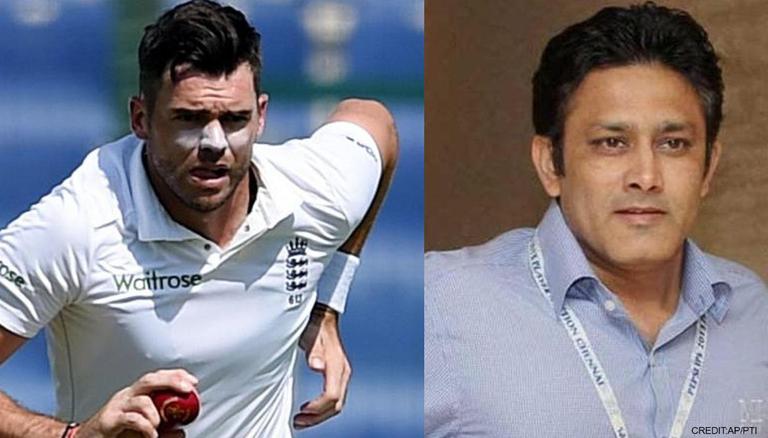 
England pacer James Anderson is on the verge of breaking Indian spinner Anil Kumble's record in Test cricket. Anderson, who has 616 wickets in the longest format of the game is just four wickets away from becoming the third-highest wicket-taker in the history of Test cricket, a record currently held by Kumble. Anderson will look to achieve the feat in the second Test match against New Zealand, starting June 10.

If Anderson reaches the milestone in the second Test, he will become third on the list of highest wicket-takers for their country in Test cricket, featuring behind Sri Lanka's Muttiah Muralitharan and Australia's Shane Warne, who have taken 800 and 708 wickets respectively. Last year, Anderson became the first fast-bowler in the world to reach 600 wickets in Test cricket for his country.

Anderson has played 161 Test matches for England since his debut in 2002 against Zimbabwe. Anderson is currently the 4th-ranked Test bowler in the world and the only English player to feature in the top-5 of ICC Test bowling rankings. Anderson averages 26.46 in Test cricket. The English pacer has also played 194 ODI matches for his country and has taken 269 wickets at an average of 29.22.

The second Test match between England and New Zealand will begin at 3:30 pm IST on June 10 and will be played at Edgbaston. The first match of the series was drawn after no side emerged victorious following the end of play on Day 5. New Zealand was looking good to win the first match before rain disrupted the play on Day 3, causing a loss of time. The decider is going to be interesting to watch with both New Zealand and England missing some of their key players.

New Zealand will miss out on skipper Kane Williamson, who has been rested in light of an elbow injury. Williamson is expected to lead the side in the much-anticipated World Test Championship (WTC) final against India and an injury at this moment could be lethal for the side, who will not only miss their captain but also a prolific batsman.