English batsman Jonny Bairstow caused destruction on the field, quite literally, as he broke the team fridge with his powerful six off Trent Boult.

Walking in to open the innings for SunRisers Hyderabad, Jonny Bairstow unleashed upon Mumbai Indians bowlers on Saturday at the Chepauk. The English batsman, who has been playing down the order in the first two games, was promoted to open the innings with Wriddhiman Saha being benched. Bairstow particularly wreaked havoc in the third over of the game as he picked on Kiwi speedster Trent Boult.

The English batsman caused destruction on the field, quite literally, as he broke the team fridge with his powerful six off Trent Boult. In the third over, Bairstow thumped Boult's third delivery over mid-off to shatter his team fridge's glass into pieces. Bairstow blitz, which still continues, has left netizens awestruck as he leads the chase against MI's total. Apart from scoring 18 runs off Boult's 3rd over, Bairstow smashed 19 runs off Adam Milne's first over. Here's how netizens reacted: 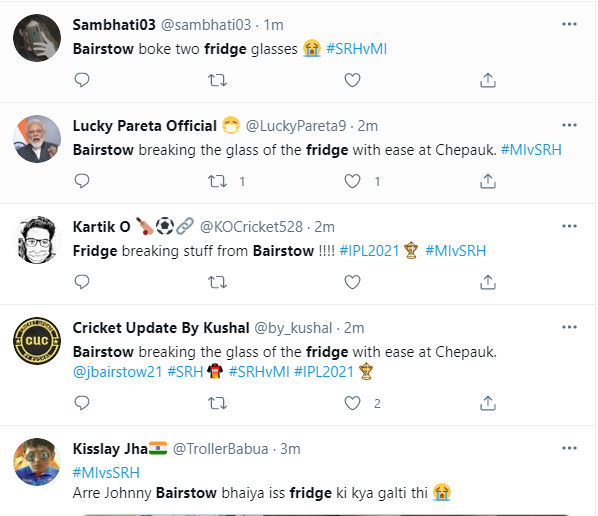 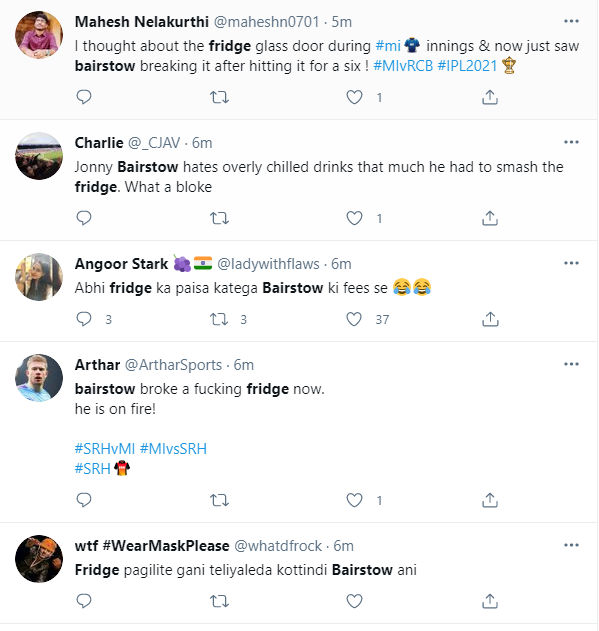 of the season, skipper David Warner made four changes to the playing XI heading into the contest against Mumbai Indians. Playing at the sluggish Chepauk, Warner opted for an extra specialist spinner alongside Rashid Khand, handing Mujeeb ur Rahman his SunRisers debut against Mumbai. The Australian talisman also benched 'yorker king' T Natarajan, thereby intriguing fans and analysts regarding SRH's strategy.

However, during the first innings, SRH team director Tom Moody revealed that the Indian pace sensation has been rested and dropped. Elaborating on the management's decision, Moody highlighted that it is a long tournament and that the team needs Natarajan to be at his best going further. The SRH team director also made note of Natarajan's lengthy tour in Australia and the recent international series against England at home. "Not dropped, rested - Managing his workload, we know it's a long tournament and he's had quite a lot of cricket already under his belt," Tom Moody told the commentators on-air at Star Sports.

Apart from Natarajan, Warner has also benched Wriddhiman Saha and brought in Virat Singh. Jason Holder has been replaced by Abhishek Sharma and Khaleel Ahmed finds a place in the playing XI as well. For Mumbai, Rohit Sharma has made just one change bringing in Adam Milne for Marco Jansen.

Meanwhile, Rohit Sharma won the toss on Saturday at the Chepauk and chose to bat first. The Mumbai openers got off to a blistering start but the momentum slowed with Hitman's wicket and the subsequent dismissal of Suryakumar Yadav. de Kock was also denied his half-century by Mujeeb ur Rahman. A late blitz and powerful hits by Kieron Pollard propelled Mumbai's total to 150. Vijay Shankar and Mujeeb ur Rahman picked two wickets each in the game while Khaleel Ahmed dismissed Hardik Pandya. SunRisers need 151 to win their first game of the season.