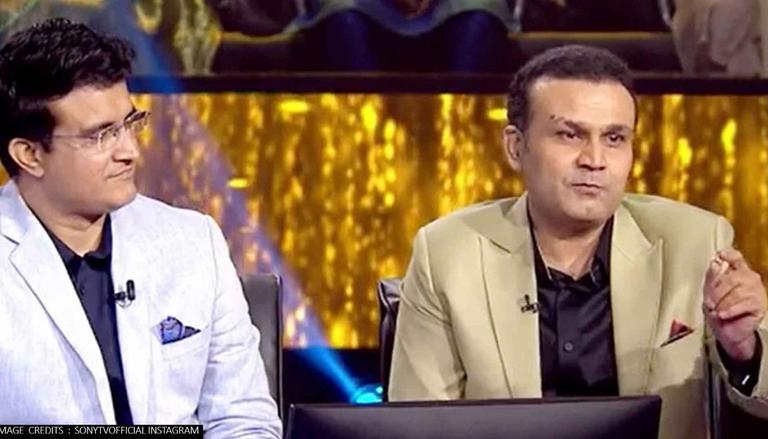 
The latest promo of 'Kaun Banega Crorepati 13' on Tuesday saw former Indian cricketers Sourav Ganguly and Virender Sehwag take the hot seat in the show hosted by megastar Amitabh Bachchan. The promo shared by Sony Entertainment Television saw the cricketers become the first celebrity guests on the latest edition of the show. The guests took the stage as part of a new addition called 'Shaandaar Shukravar', where a new celebrity will feature each week.

The thirteenth season of KBC is set to be the most star-studded as celebrity guests from all walks of life is set to play and win once every week. Meanwhile, all prizes won by these celebrities will go to the social cause closest to their hearts. As part of this, India’s star opening batsman Sehwag aka Veeru will now feature with BCCI president and former cricketer Saurav Ganguly. In the latest promo, the witty duo can be seen on the show with host Amitabh Bachchan. In the promo, Sehwag was seen teasing Saurav Ganguly over his much-publicised rift with former Team India coach Greg Chappell.

The KBC 13 promo showed that at one point of the episode, Amitabh asked Sehwag what would happen if they were fielding in a cricket match and missed a catch. As a reply to the scenario, the witty cricketer said that if Greg was the coach, the song "Apni toh jaise taise kat jayegi," fits perfectly. Making a funny observation point at Ganguly, Veeru sang "Aapka kya hoga janaab-e-ali (But what will you do, sir)?" This was a call-back to the fact the Greg was sacked and the team continued to play.

READ | 'He could get his job done in 2 hours': SL legend Muralitharan on Sehwag's batting heroics

Sehwag, who is known for his one-liners and funny tweets, left both Amitabh and Ganguly laughing with his choice of song. Later on during the conversation, Amitabh Bachchan also asked the cricketers how they felt when they won against Pakistan. Continuing on his witty replies, Sehwag said made a call back to one of Bachchan’s hit movies and said that there was a famous dialogue from the 1988 film 'Shahenshah' apt for such a situation. He said, “Rishte mein toh hum tumhare baap lagte hai (I am your father)” which was the starting to the iconic dialogue and then added that “Hum toh baap hai hi unke (We really are their fathers)” to once again break both the host and Ganguly to laughter. The KBC 13 episode starring the two former cricketers will air on September 3.