Kevin Pietersen never leaves any stone unturned in entertaining his fans on most of the occasions whenever he makes his presence felt on social media. Some time back, KP seemed to have expressed his interest in joining Bollywood with his morphed photographs on a couple of occasions in two of the popular Hindi chartbusters. He then made a blunder while wishing legendary all-rounder Jacques Kallis on his birthday and was trolled by the fans for it as well. Recently, Pietersen had come forward to take a dig at Indian skipper Virat Kohli.

READ: Aakash Chopra on Glenn Maxwell's stress and what players deal with

Virat Kohli had posted a still of himself where he is seen playing a cover drive which is his trademark shot not too long ago with a caption 'A good cover drive is therapeutic'. Take a look.

After having gone through Kohli's tweet, his former RCB team-mate Kevin Pietersen decided to grab the spotlight by writing that he thought that all his cover drives went through mid-wicket.

I think all my cover drives went through mid-wicket!

However, he ended up getting it back from Virat Kohli's fans. Here are some of the reactions. 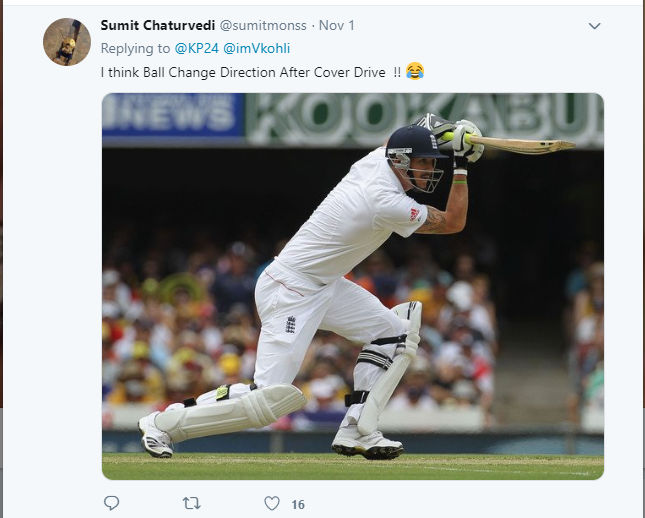 Former England skipper Michael Vaughan picked India's skipper Virat Kohli as the best batsman across all formats of the game as he responded to a fan on Twitter. Responding to a stat that hinted at Virat Kohli for ODIs, Steve Smith for Tests and David Warner for T20s, Michael Vaughan called it a no brainer to pick Virat Kohli as the best batsman across all the formats. Virat Kohli is the top-ranked ODI player according to the ICC rankings and has dominated at the top position with his consistent performances.

READ: Mohammad Irfan has a forgettable day with the ball on his comeback