Punjab Kings skipper KL Rahul replied to his teammate Mayank Agarwal's Instagram picture, which he posted on the occasion of Children's Day on November 14. 
Indian cricketer Mayank Agarwal took to his official Instagram handle on Sunday, November 14, and posted a throwback picture of himself holding a cricket bat during his childhood. On spotting the post by the Punjab Kings player, PBKS skipper KL Rahul took a hilarious jibe at his teammate on the comments section. Rahul and Agarwal play for the PBKS in the Indian Premier League(IPL) and are among the top scorers of the team in the popular league.

While sharing the picture with the children's day wish, Agarwal captioned it by saying that everyone should dream big, work hard and make it happen. Replying to the post, Rahul pointed out Agarwal’s toe is up in the picture. By doing so, Rahul took a slight dig on his teammate’s stance while batting. The comment received many likes from the cricket fans as fans speculated that Rahul is missing his Karnataka teammate. 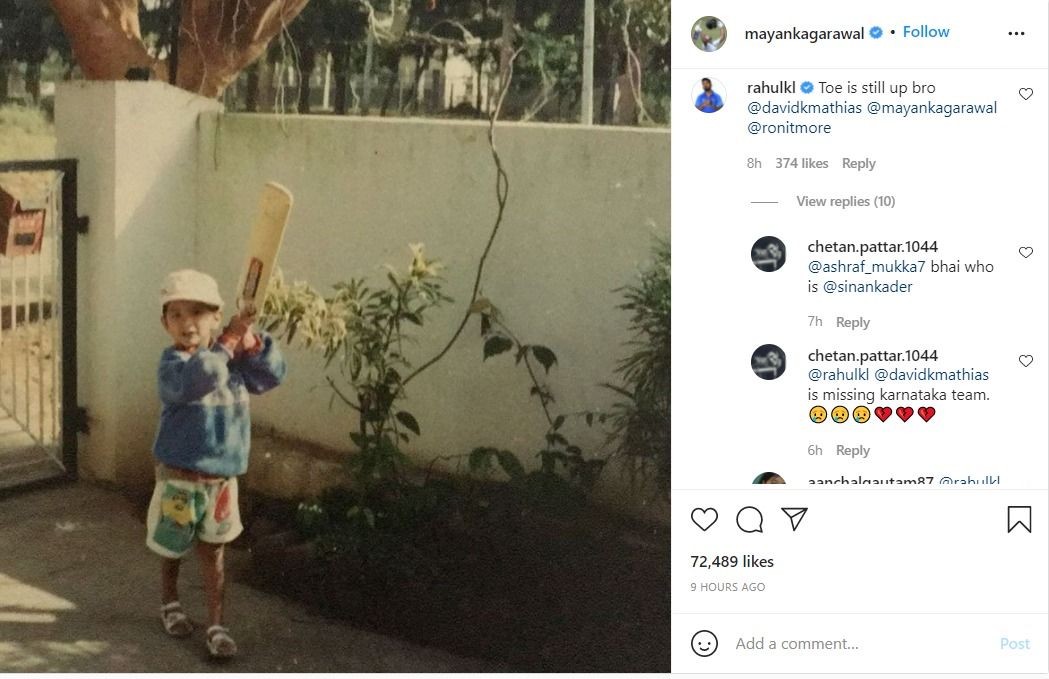 Along with playing together for the PBKS in IPL, both cricketers started their cricketing career by making their List-A debut while playing for Karnataka in Indian domestic cricket. While playing for IPL in the 2021 edition of the tournament, Rahul and Agarwal emerged as the top scorers of the Punjab side. Rahul went on to amass a total of 626 runs for the team from a total of 13 matches while batting at a strike rate of 138.80. His best performance in the tournament came against CSK in the final league match, where Rahul scored 98 unbeaten runs off just 42 balls. Rahul also finished the tournament as the third-highest run-scorer behind Chennai Super Kings(CSK)'s Ruturaj Gaikwad and Faf du Plessis.

READ | India vs New Zealand T20: How Rahul Dravid could be a turning point for Indian cricket?

At the same time, Mayank Agarwal scored a total of 441 runs while batting for PBKS in a total of 12 matches at a strike rate of 140.44. He notched up four half-centuries in the tournament which also includes his effort of 99 unbeaten runs off 58 balls during the first leg of IPL 2021 in India. Both players will next ply their trades alongside each other in India's upcoming Test series against New Zealand.