Darren Sammy, Aakash Chopra, and others from the cricketing world react to New Zealand calling off their Pakistan tour just before the start of the first match. 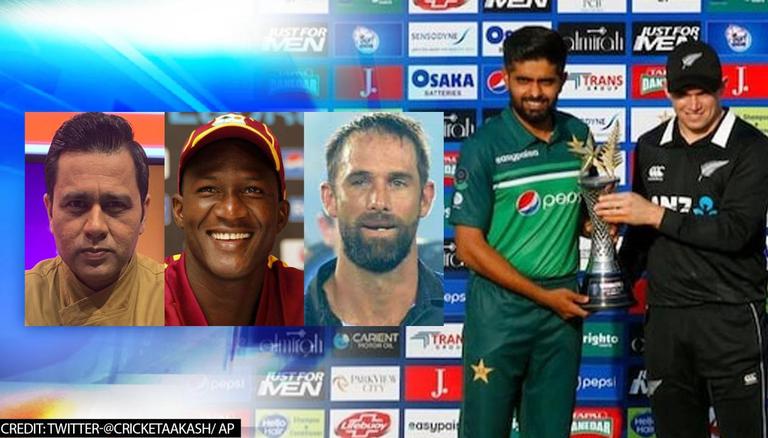 
Well-known names in the cricketing fraternity, including Darren Sammy, Aakash Chopra, Jason Gillespie and a few other players took to Twitter to express their feelings after New Zealand’s tour of Pakistan got cancelled on Friday. The first ODI of the three-match series was scheduled to begin on Friday, but it was called off hours prior to the start. The cancellation of the series is being seen as a massive blow to Pakistan, who were expecting International cricket to return to their country after many years of isolation. With the series now cancelled, Twitter users were quick to pounce on the announcement with their different reactions, but what caught everyone’s eye was the reactions from the veteran cricketers.

Former West Indies skipper Darren Sammy expressed his disappointment by tweeting that he woke up to the news of the cancellation of the series due to security concerns. He added that he has been visiting and playing in Pakistan for the last six years and said he always felt safe. However, with the series cancelled before it could commence, Sammy added that this comes as a massive blow for Pakistan.

Disappointed waking up to the news of the cancellation of the Pakistan Vs New Zealand series because of security issues.Over the last 6 years playing and visiting Pakistan has been one of the most enjoyable experiences. I’ve always felt safe. this is a massive blow to Pakistan ☹️

Another prominent reaction was from cricketer turned commentator and expert Aakash Chopra. Chopra in a tweet mentioned that the tour was cancelled hours before the scheduled start of the first ODI. Citing security issues, he added that this could have a serious impact on the future tours of international teams to Pakistan. He also mentioned in his tweet that Pakistan are slated to host England, Australia and New Zealand again in the coming year.

NZ has canceled their tour to Pakistan hours before the start of the first match…citing security concerns. This might have serious consequences on the future tours to Pakistan. England-Australia and NZ (again) slated to travel to Pak in the next 12 months. #PakvNZ

It's not right to be critical of New Zealand: Jason Gillispie

Former Australian speedster Jason Gillespie also made his name and opinion count among the plethora of reactions. He said that it is wrong to criticize New Zealand for cancelling the tour lightly as they have shown their willingness to do their part to promote the game, time and again. In a second tweet, he displayed his disappointment for Pakistan, its players and the supporters. He added that the country has been denied consistent top-level cricket for a long time now and hoped for the situation to improve quickly.

1/2 New Zealand Cricket would not have made the decision to end their tour of Pakistan lightly- they have shown time and again that they are willing to do their part to promote and play our great game so I don’t think it’s right to be critical of them.

2/2 we are all however disappointed for Pakistan cricket, it’s players and supporters. A wonderful cricketing country that has, for a long time, been denied consistent top level cricket. Hopefully the situation in the country improves quickly! 🤞🏽

Lastly, New Zealand cricketers Grant Elliott and Michell McClenaghan also reacted to the news by tweeting about it. Elliott termed the series cancellation, sad news for players and all the fans. Meanwhile, McClenaghan reacted by tweeting a crying face emoji.

WE RECOMMEND
NZ-Pak series abandoned: Harsha Bhogle says it 'will impact other teams touring there'
Shoaib Akhtar, Sachin Tendulkar at the centre of Indian fans trolling ICC; here is why
Who is Pakistan cricket fan Sarim Akhtar? How did he get famous amongst Indian fans?
WATCH: Run, Run, Run, Run, Run; Pakistan get 5 runs after comedy of errors by New Zealand fielders
Listen to the latest songs, only on JioSaavn.com