Ex-England captain Michael Vaughan comes out in support of Eoin Morgan & Jos Butler after some fans question the nature of their tweets from 2017 and 2018. 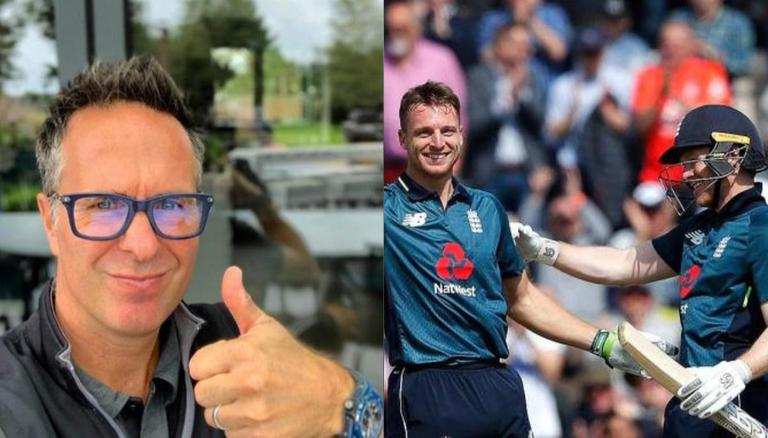 After being shaken by the Ollie Robinson scandal, the England Cricket Board has come under the scanner once again. Tweets from 2017 were unearthed where white-ball captain Eoin Morgan alongside wicketkeeper-batsman Jos Butler could be seen mocking Indians for the way they speak English. While many fans want the ECB to look into the matter, Michael Vaughan is of a contrasting opinion. Here is how the ex-captain reacted to the latest England cricket controversy surrounding the Jos Buttler Eoin Morgan social media posts.

The two notable Engish players have been accused of being racist towards Indians.  Tweets from their accounts from 2017 have surfaced, in which the two, along with Brendon McCullum, make disparaging remarks about the way Indians speak English. After the Ollie Robinson tweets saga, Morgan and Butler also are being scrutinised by netizens after their historic tweets resurfaced. A certain section of fans wants the ECB to reprimand the players for their actions.

However, Michael Vaughan has come out in their support. The cricketer-turned-commentator took to his social media accounts to react to the latest developments. He opined that it was 'ridiculous'  that people were questioning the English board for the remarks made by Eoin Morgan and Jos Buttler. Here is how Michael Vaughan responded to the latest England cricket controversy:

Screengrabs of Jos Buttler saying "Well done on double 100 much beauty batting you are on fire sir" to Alex Hales from August 2017 have emerged. The mocking has been carried on between Morgan and Brendon McCullum to Buttler in May 2018, with the skipper saying, "Sir you're my favourite batsman" and McCullum adding, "Sir, you play very good Opening batting." Many believe that the three cricket stars were making fun of Indians in the posts. It remains to be seen if the duo also will be penalised like Robinson or ECB decided to take a different route.

The Ollie Robinson tweets from 2012 to 2013 resurfaced online after stumps on Day 1 of the Test series opener between England and New Zealand. The pacer came under the scanner for his racist and sexist posts on the micro-blogging site. While he was subjected to a lot of flak online for the same, he was also reprimanded by the England Cricket Board (ECB). The cricketing body has taken a stern call by suspending the talented pacer from international cricket pending an investigation into discriminatory tweets.