Michael Vaughan was at the receiving end on social media for his early World T20 prediction after England had beaten New Zealand to win the T20I series.

Michael Vaughan has been trying to grab the spotlight on social media throughout this year but on most occasions, he has been at the receiving end as his comments have not gone down well with the fans. Vaughan, who had represented England from 1999 to 2008 in 82 Tests and 86 One Day Internationals and had also led them to the finals of the ICC Champions Trophy 2004 and an Ashes triumph in 2005 has once again found himself at the wrong end.

After England had beaten New Zealand by nine runs in a nerve-wracking super over on Sunday to win the five-match T20I series 3-2, Michael Vaughan took to social media and made an early World T20 prediction by mentioning that either England or the hosts Australia would be winning it.

The fans came forward to troll the former English skipper. Here are some of the reactions. 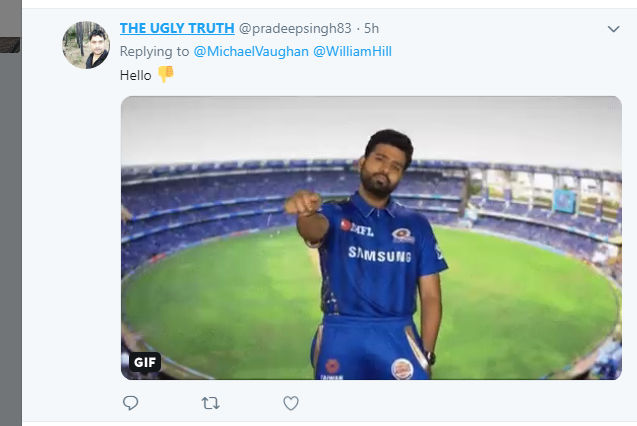 England snatch another win in Super Over

Jonny Bairstow's quickfire 47 off 18, laced with five sixes and two boundaries, got England off to a flying start before the hosts put the break on the visitors' momentum. Requiring 16 runs off 6 balls, Chris Jordan smashed 12 runs off three balls to help England reach 146 runs and tie the game. For the second time in four months, fans witnessed yet another super over, this time in the shortest format of the game, to decide the winner of the contest. With England being sent to bat first in the super over, Eoin Morgan and Jonny Bairstow hit a six each as they helped the visitors post 18 runs in six balls. New Zealand's Tom Seifert and Martin Guptill failed to hit any big shots off a disciplined super over from Chris Jordan, thereby handing England a comfortable 9-run win over New Zealand.

READ: Shikhar Dhawan poses with the IAF officers, has a heartwarming message