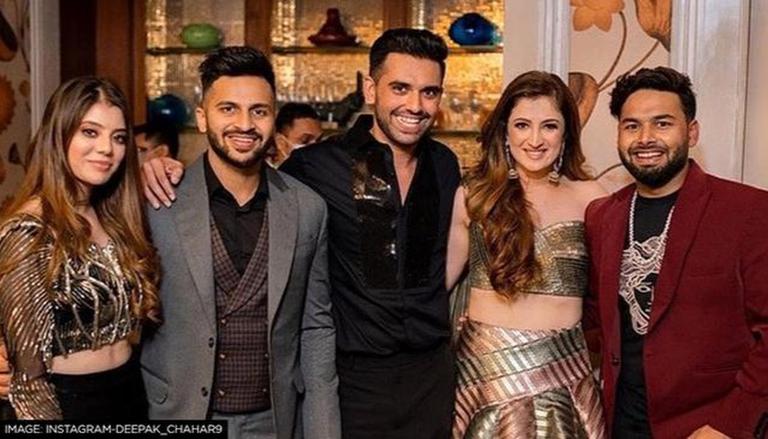 
Team India and Chennai Super Kings (CSK) fast bowler Deepak Chahar married his girlfriend Jaya Bhardwaj in a grand wedding ceremony on June 2, with the reception held on June 3, where several members of the cricketing fraternity were in attendance. Wicket-keeper Rishabh Pant, pacer Shardul Thakur and former Team India batter Suresh Raina were some of the big names that attended the wedding reception.

As seen in the various pictures below, several famous current and former Indian cricketers along with Minister of Sports & Youth Affairs Anurag Thakur attended the grand wedding of Deepak Chahar and Jaya Bhardwaj. Some of the cricketers could be seen enjoying their time by dancing alongside Chahar.

Taking to social media, Deepak Chahar shared an image of his marriage with Jaya Bhardwaj, with a heartfelt caption: "When I met you first time I felt that you are the one and I was right . We have enjoyed every moment of our life together and I promise you to keep you always happy like this. One of the best moment of my life. Everyone pls give your blessings to us."

Chahar had proposed to Jaya in the UAE last year when the IPL 2021 season was taking place. As seen in the video below, the 29-year-old could be seen getting down on one knee and romantically proposing to his girlfriend. Jaya said yes to the proposal and the video immediately went viral on social media.

READ | 'Not fair for Rishabh to be compared with Dhoni': Sourav Ganguly on Pant & MSD analogy

Deepak Chahar was last seen in the T20I series against the West Indies in February earlier this year, after which he was bought by the Chennai Super Kings for a whopping Rs 14 crores during the IPL 2022 auction. However, a quad injury followed by a back injury ruled out him of the entire season.

With Chahar not in the team, CSK struggled massively during the IPL 2022 season as they finished ninth with just four wins all campaign. There is still no update on the 29-year-old's comeback, but if the Indian fast bowler continues to remain on the sidelines, there is also a chance that he may miss the T20 World Cup, which is set to take place later this year.