A German bowler was seen delivering balls during the European Cricket Championship match against Czech Republic, in a similar action to that of Jasprit Bumrah's 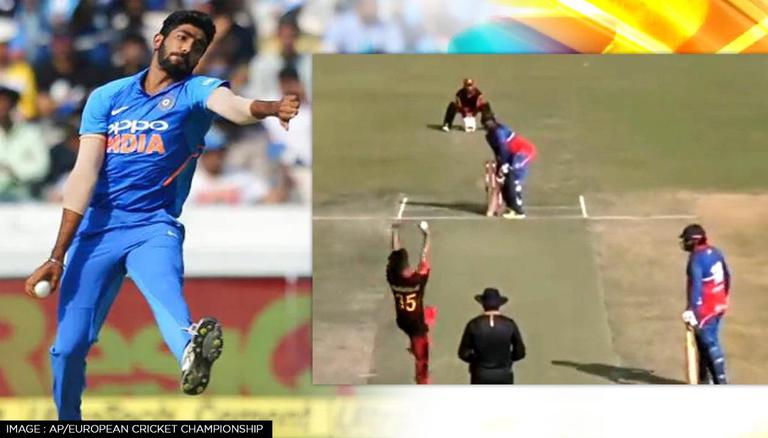 
A bowler from the German cricket team was spotted delivering balls in a similar way to Indian cricket sensation Jasprit Bumrah during a European Cricket Championship match between Germany and the Czech Republic. In a video, that is going viral on Twitter, everything from the German bowler’s run-up to his bowling action is quite similar to the Indian pacer. Jasprit Bumrah, courtesy of his unorthodox bowling action, has successfully become one of the best bowlers in global cricket.

Watch the video of the German bowler, bowling with Jasprit Bumrah’s action-

The European Cricket Championship is a group of tournaments played among the cricket-playing nations across Europe. The 2021 edition of the tournament is being played in the T10 format. There are three groups in the current season, with Germany and Czech Republic placed together in Group C, along with Italy, Finland, and the England XI. As of September 29, the defending champions Germany found themselves in second place at European Cricket Championship Group C Points Table with four wins to their name in six matches. At the same time, Czech Republic are placed in the third position with three wins in six matches.

While talking during Inside Out Interviews by ICC in 2020, Bumrah was asked about his unique bowling action. In reply to the question, Bumrah replied, “I've never been to a professional coach as such (in his formative years). All my cricket is self-taught. Everything I learned was through television, watching videos... so I don't know how this action developed. There were always some people doubting that should I change it or not, but I've never really listened to them a lot. I always had belief that it could work.” Bumrah bowls for India with a unique unorthodox action, with the batsmen taking a bit longer while facing him to get their feet moving. He made his international debut under the captaincy of legendary India captain MS Dhoni against Australia in 2016 and has since scalped 59 T20I wickets in 49 matches, 108 wickets in 67 ODI matches, and 101 Test wickets in 24 matches.