Prithvi Shaw’s rumoured girlfriend Prachi Singh is a TV actress, who made her acting debut with Udaan on Colors TV in 2014. Prachi is popular on social media. 
Delhi Capitals (DC) star batsman Prithvi Shaw's rumoured girlfriend Prachi Singh has shared a dance video on Instagram. Singh took to the social media platform to share her dance video, where she can be seen grooving to the 'Dilbar' song from the film 'Satyameva Jayate'. The post has garnered more than 2,040 likes since being shared on Wednesday. The song was originally composed in 1999 but was relaunched for the 2018 film with Neha Kakkar as lead singer.

Shaw’s rumoured girlfriend Prachi Singh is a television star who made her acting debut with Udaan on ColorsTV in 2014. Prachi is popular on social media, where she regularly shares dance videos. The rumoured relationship between Prachi Singh and Prithvi Shaw first came into the spotlight last year after the former commented on a picture shared by the 2018 ICC U-19 World Cup-winning captain on Instagram.

Earlier last month, Prachi Singh shared an Instagram story to celebrate the Delhi Capitals (DC) batsman’s comeback in international-level cricket. Prithvi Shaw smashed an amazing 72 0ff 38 balls in his first match of IPL 2021 since being dropped from the playing XI in the later stages of the Indian Premier League (IPL) last year. Prithvi Shaw’s rumoured girlfriend Prachi Singh took to her Instagram story to share a picture of the young cricketer and wrote, “What a start of The ‘SHAW’, as she also tagged the batsman accompanied by a heart emoji. 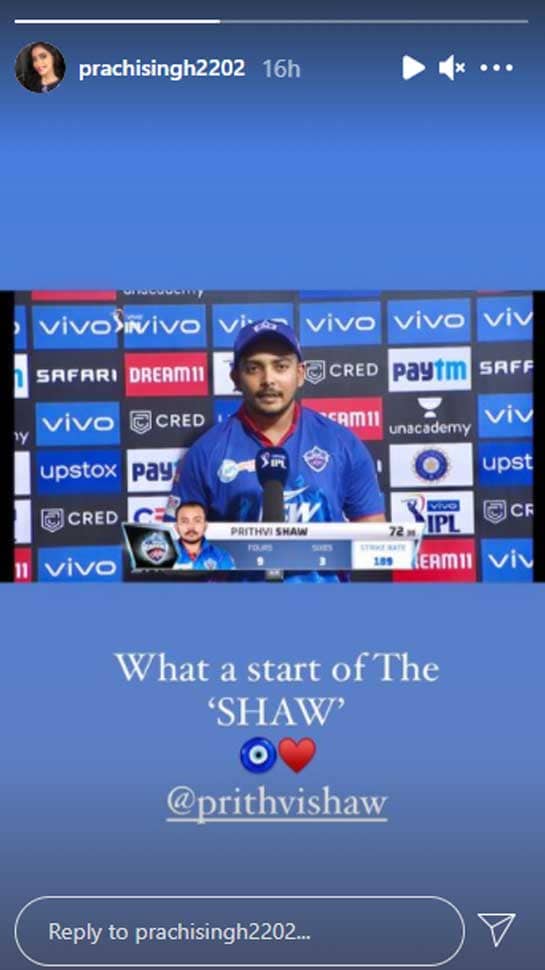 As far as IPL 2021 is concerned, Shaw was putting up a great show with the bat before the BCCI had to suspend the tournament for an indefinite period of time due to the COVID-19 pandemic. Shaw had scored 308 runs in 8 games at an average of 38.50 and strike rate of 166.48. After playing almost half the tournament, Shaw had three half-centuries to his name, including some match-defining knocks. The recently postponed season was easily the most successful year for Prithvi Shaw in the IPL, since his debut in 2018.

READ | KKR coach Brendon McCullum praises Prithvi Shaw: 'That is how we want to play'

READ | Shikhar Dhawan lauds opening partner Prithvi Shaw, says 'he makes it easier for me'
First Published: 7th May, 2021 18:18 IST
SUBSCRIBE TO US