Ravi Shastri Caught Taking A Nap In The Dressing Room, Gets Mocked

Ravi Shastri was seen taking a nap in the dressing room at Ranchi during the third Test against South Africa. He has become a subject of hilarious memes.

Ravi Shastri seems to be having a very good time after World Cup 2019 where India had finished as the semi-finalists. A month after the quadrennial event, Shastri's term as Team India's head coach was extended till ICC World T20 2021. During his second tenure, India had an outstanding Caribbean tour where they had whitewashed West Indies in all the formats of the game. On Tuesday, India handed South Africa yet another innings defeat to register a clean sweep. However, Shastri was also trolled on social media for something that the fans thought was funny.

India had an easy outing against South Africa in the three-match Test series as they did not have to break a sweat to win either of the matches. Meanwhile, Ravi Shastri who is often seen watching his team perform in the middle decided to take a nap. Nonetheless, the image of him sleeping went viral on social media and the cricket fans came forward to troll him. Here are some of the reactions. 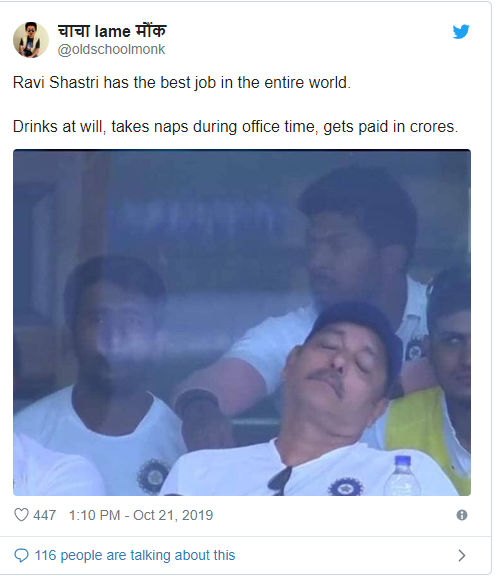 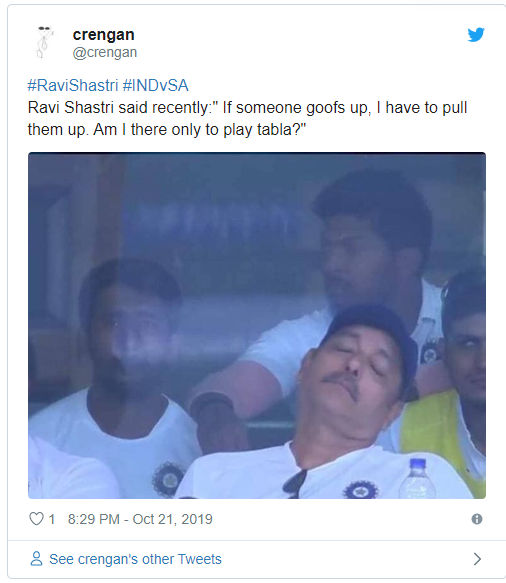 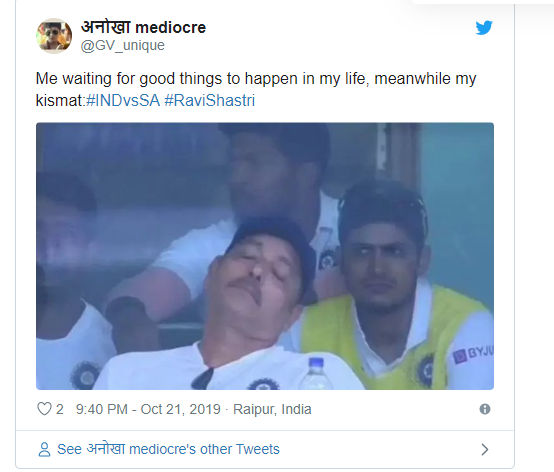 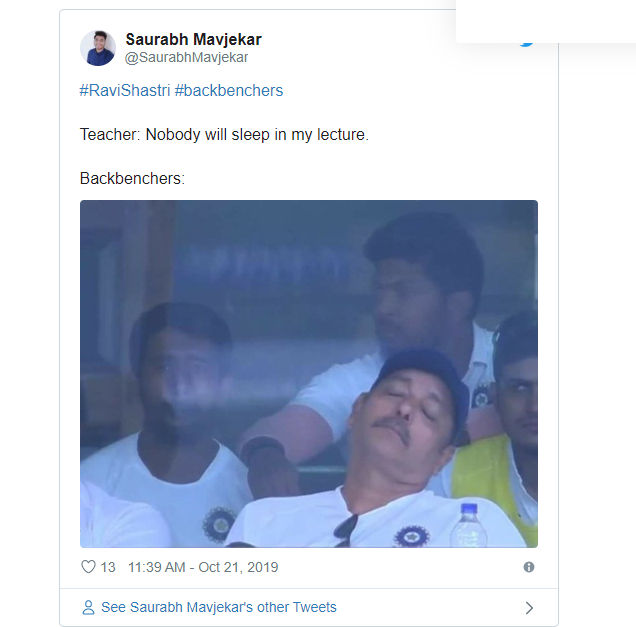 Earlier, former Pakistan skipper Sarfaraz Ahmed had also become a subject of hilarious memes after he was seen yawning during their World Cup 2019 league match against India earlier this year. Fans had asked whether the Champions Trophy-winning captain 'had Chicken Biryani' during the rain break.

An undisputed win for India

It was indeed an undisputed win for India as they handed an innings defeat to the Proteas once again just like the previous Test at Pune. It was only a formality for the Virat Kohli-led side on Day 4 after already having reduced South Africa to 132/8 on Monday before bad light stopped play. It did not take the hosts too long to wrap up the contest on Tuesday as they cleaned up the tail in no time. By the virtue of this win, India are also placed comfortably at the summit of the points table with 240 points from five matches. No other team is anywhere near them. New Zealand with 60 points are at the second spot.

PEOPLE HAVE PLEDGED SO FAR
Govt determined to conclude Naga pact: Governor R N Ravi
Vinod Rai answers the big questions: On Kumble, Shastri, Kohli & Dhoni
Ganguly reacts to question about Shastri, says 'What has he done now?'
Here’s why Ravi Shastri’s trending as Ganguly becomes BCCI President
Ravi Shastri gets an Iron Man reference for this picture from netizens
Jubilant Virat Kohli says 'a win like this sets up the whole tour for us' after first T20I
Nick Larkin takes a stunner near the boundary to get rid of a well-set Chris Lynn
Pakistan restrict Bangladesh to 141-5 in Twenty20 opener
DO NOT MISS
AAP CHALLENGES BJP TO ARREST IMAM
NARASIMHA RAO SLAMS MAHA GOVT
MOVED BY THE WARMTH: BRAZIL PREZ
RAHUL GANDHI SLAMS BHIMA-KOREGAON
VVS LAXMAN THANKS PM MODI
LIFE INSURANCE FOR NRI IN INDIA