Riyan Parag took to his official social media account on Tuesday to raise concerns about the flood in his state that have had a devastating impact on people. 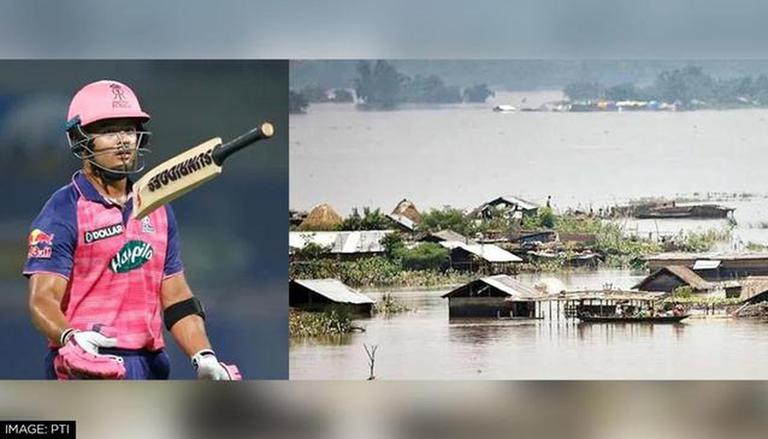 
Assamese cricketer Riyan Parag took to his social media space on Tuesday to raise concerns regarding the flood situation in his state that have had a devastating impact on people, leaving several displaced. Officials have said that Assam's flood situation remains bleak with all major rivers in spate, impacting over 47 lakh people and claiming 11 more lives.

Taking to his official Twitter account on June 21, Riyan Parag raised concerns about the people who have been displaced owing to the Assam floods, going on to state that several dreams have been shattered as a result. It is pertinent to mention here that this is not the first time that the state has been affected by floods, as a similar situation was also witnessed in 2019.

If you can celebrate the tea of Assam, you must also be concerned for the floods of Assam.

On that occasion, Parag had donated Rs 1 lakh to the Chief Minister's Relief Fund (CMRF), a move that was appreciated by the then CM Sarbananda Sonowal. Sonowal took to his official Twitter handle to state that it was 'heartening to see the young generation come forward' in such difficult times.

Thank you @ParagRiyan for your contribution of ₹ 1 Lakh to the Chief Minister's Relief Fund.

It is heartening to see the young generation coming forward in large numbers to help those affected during #AssamFloods. pic.twitter.com/8HcAOa8iih

Assam floods have had a devastating impact on people

According to PTI, Assam has been reeling under devastating floods over the past week, impacting 47,72,140 people in 32 of the 36 districts. The fresh fatalities have pushed the toll in this year's floods and landslides in Assam to 82, a bulletin issued by the Assam State Disaster Management Authority (ASDMA) said.

Three new fatalities were recorded in Darrang, two in Nagaon – police personnel who got washed away while trying to rescue marooned people – and one each in Cachar, Dibrugarh, Hailakandi, Hojai, Kamrup and Lakhimpur. Seven people were reported missing, with two each in Udalguri and Kamrup and one each in Cachar, Darrang and Lakhimpur. After calling the floods in the state a national calamity, Assam CM Himanta Biswa Sarma held a virtual meeting with state ministers, senior officials and deputy commissioners in the districts to review the grave situation.

The CM said relief and rescue operations in Barak Valley will be bolstered by roping in additional NDRF teams from the neighbouring states of Manipur and Tripura before adding that he was also in touch with his Meghalaya counterpart for restoration of vehicular traffic on the Jowai-Badarpur road that has been badly damaged due to floods and landslides.