Indian skipper Rohit Sharma hilariously forgot to decide his call on winning the toss ahead of the India vs New Zealand 2nd ODI match at Raipur on Saturday. 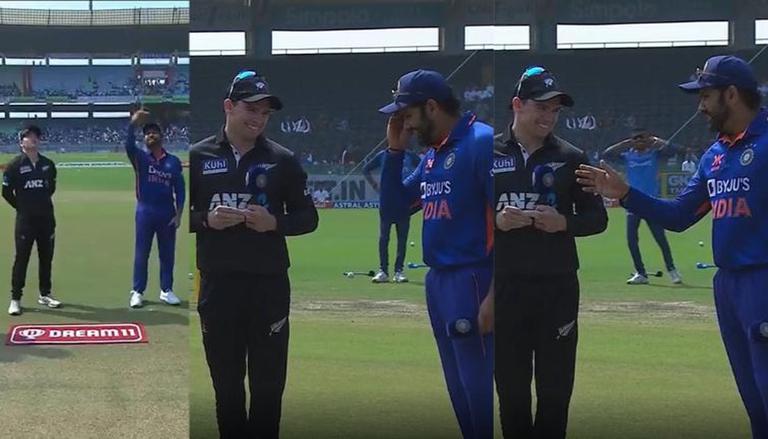 
Team India skipper Rohit Sharma became the center of talks for cricket fans on social media after he forgot to name his call at the toss, ahead of India vs New Zealand 2nd ODI on Saturday. After flipping the coin, Sharma won the toss and was asked to reveal his decision. Rohit bizarrely took a while to recall what the team decided to do if they win the toss, before opting to bowl first.

As the events unfolded, the opposition captain Tom Latham had a hard time controlling his laughter, alongside the Indian players standing behind. Cricket fans also reacted to the hilarious incident within no time and flooded Twitter with creative memes. Sharma later spoke to presenter Ravi Shastri and explained what happened at the toss.

🚨 Toss Update 🚨#TeamIndia win the toss and elect to field first in the second #INDvNZ ODI.

"There is a lot of talk within the team"

Speaking to Shastri, Rohit said, “I forgot for a minute, because there is a lot of talk within the team, as to what we want to do and all of that. At the same time, we want to challenge ourselves in difficult conditions as well. So, for a minute I forgot we are going to bowl first”. Rohit further revealed that India will take the field with the same playing XI that played in the 1st ODI.

Rohit Sharma took whole 20 seconds to decide on what he was going to do after winning the toss and Shami , Chahal and Siraj were smiling😂 pic.twitter.com/iWcSaeJ1Bl