Indian cricket players share a good camaraderie between them. Their friendship also means that they can pull each other’s leg from time to time. One such incident occurred recently when Indian opener Shikhar Dhawan took to Instagram and poked fun at the expense of Test specialist Ajinkya Rahane.

After dinner on a night out, Indian cricketer Cheteshwar Pujara posted a picture on Instagram with teammates Ajinkya Rahane and Mayank Agarwal. The cricketer added a caption in which he mentioned the food being “excellent”. Judging by Rahane’s facial expression in the picture, limited-overs specialist Shikhar Dhawan took to the photo-sharing site and made fun of him. In his reply, Dhawan wrote that it looks like Rahane is suffering from constipation. Checkout what Shikhar Dhawan wrote in the screenshot below. 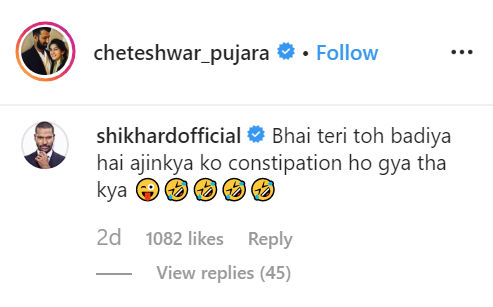 Also Read | Sri Lanka 'safe' To Tour For England, According To Kumar Sangakkara

Shikhar Dhawan was part of India’s squad which recently won the home T20I series against Bangladesh. The batsman scored 91 runs in three matches and shared an opening stand of 118 with stand-in captain Rohit Sharma at Rajkot. On the other hand, Test specialists Cheteshwar Pujara, Ajinkya Rahane and Mayank Agarwal will now be making a return to the playing XI for the upcoming Ganguly-Durjoy series. The opening Test will be played at the Holkar Stadium in Indore from November 14 onwards. The three players are also likely to be part of the Indian squad in a historic first-ever Day-Night Test in the country. The two teams will face each other in a pink-ball Test for the final match of the series at Eden Gardens on November 22.

Exceptional bowling by @deepak_chahar9!
He bowled very smartly and used his variations well to pick up crucial wickets at crucial stages.
Special mention to @IamShivamDube, @ShreyasIyer15 & @klrahul11 to give #TeamIndia the series victory in the decider. #INDvsBAN pic.twitter.com/JTLgrC1dUz