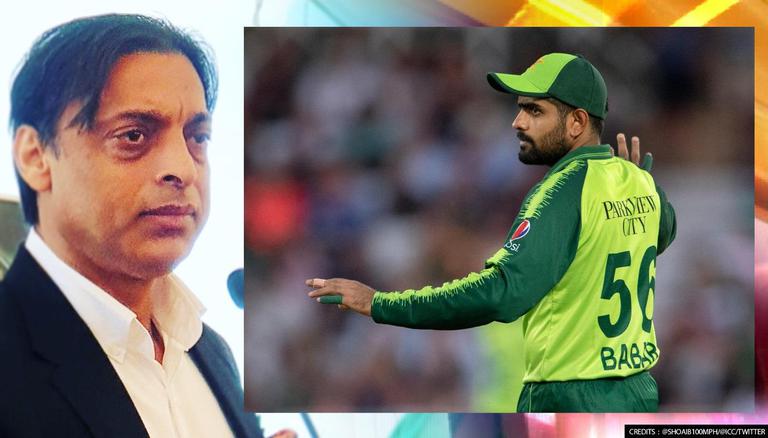 
Pace icon Shoaib Akhtar lambasted both skipper Babar Azam and the Pakistani team management for their decision to bowl first after winning the toss in the crucial second T20I against England at Headingley on Sunday.

Pakistan who had registered an impressive 31-run win in the series-opener needed one more win under their belt to take an unassailable lead in the three-match series.

"Pakistan decided to field first after winning the toss. I just don't understand one thing- it is the hottest day in England and Pakistan winning the toss have elected to bowl first? Any insane person would know that when there is so much heat in York (Yorkshire) and the fact that you have come after scoring 232 runs (batting first in the previous game), still you chose to bowl," said Shoaib Akhtar while interacting in a video posted by him on his official Twitter handle on Sunday.

"Knowing the fact that (Jos) Buttler is playing and is opening the innings, I cannot understand and it's beyond me why Pakistan has taken the decision of bowling first? Pakistan had a great opportunity to win the series," he added.

"Had I been the PCB Chairman, then I would have sacked the management and the captain at the same time for taking a poor decision of bowling first," the former tearaway fast bowler from Rawalpindi further added.

Such a poor decision by captain & the management by bowling 1st on a great batting pitch it’s beyond me just speechless 🤬🤬🤬 pic.twitter.com/Iiv3xEBkTr

The video has been captioned by Shoaib Akhtar as 'Such a poor decision by captain & the management by bowling 1st on a great batting pitch it’s beyond me just speechless'.

Coming back to the contest, England posted a stiff total of exactly 200 before being bundled out on the second-last ball of the first innings riding on skipper Jos Buttler's quickfire knock of a 39-ball 59.

In reply, the Men In Green got off to a good start as captain Babar Azam and wicket-keeper batsman Mohammad Rizwan added 50 runs for the opening stand before the former was dismissed.

The 2009 T20 world champions then ran out of fire & brimstone as they kept on losing wickets at regular intervals. Middle-order batsman Shadab Khan did try his level best to keep Pakistan in the hunt. Nonetheless, the asking rate getting steeper and no support from the other end meant that it was an uphill task for him to get the job done single-handedly for his side.

In the end, the bowling all-rounder remained unbeaten on a 22-ball 36 as the visitors were restricted to 155/9 from their 20 overs. England registered a convincing 45-run win to stay alive in the T20I series.

The decider will be played at Old Trafford Cricket Ground in Manchester on Tuesday.